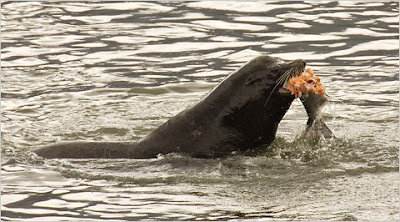 A dilemma for various special interest groups on the Northwest coast, as sea lions have moved up the Columbia River. Excerpts from a WSJ article:


The sea lions are feasting on this area's choicest runs of salmon, steelhead trout and sturgeon, and during the last decade have been taking thousands of fish every spring. The burning issue: should anything be done to keep the enormous beasts from turning Bonneville Dam into a buffet? And, if so, should lethal removal be one of the options?...

Sea lions used to be rare this far inland, scientists say. Generally they prey on fish either in the open waters of the Pacific Ocean, or at the mouth of the Columbia. The number of fish taken upriver here has been rising—to nearly 8,000 last year, or almost eight times the 2002 total—out of a annual total migration of about 300,000 Chinook salmon, the main species during the months sea lions arrive...

The Humane Society, along with the Wild Fish Conservancy, a co-litigant in Friday's filing, says sea lions have consumed an average of 2.5% of Columbia River salmon in recent years, while at the same time commercial and sport fishermen have taken up to 17% of recent salmon runs...

The legal stalemate is matched by an ethical one: which species is under a greater threat, sea lion or salmon? Recently, both the fish and the marine mammals seemed on the verge of extinction. Today both seem on their way to recovery.

There's a similar article in the New York Times, and the Anchorage Daily News offers these comments:


The issue is an example of the delicate work involved in trying to manage animal populations. In this case, both the salmon and sea lions are protected by the federal government -- the salmon by the Endangered Species Act, and the sea lions by the Marine Mammal Protection Act.

As a result, the federal government goes to great lengths to try to protect both. Under normal conditions, killing a sea lion is a serious crime, punishable by up to a year in prison and a fine of up to $100,000...

Like everything to do with salmon in the Pacific Northwest, it's complicated. And it's hard to grasp how one thing makes a difference in the system."