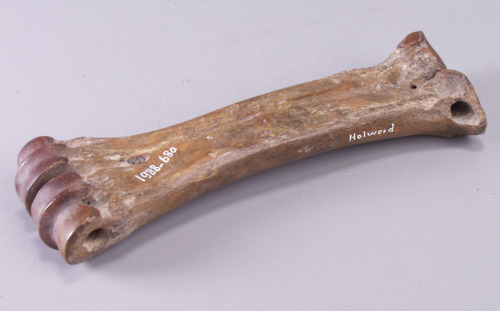 From the collections of the Memory of the Netherlands, this bone converted to an ice skate is dated to approximately 1100-1550 A.D. (via A London Salmagundi).

While looking for more information, I found this (at The Virtual Ice Skates Museum):


There is a written 'description of the most noble city of London', drawn up in Latin and published in 1180, which was translated by Stow, a London chronicler, into English in the 16th century. The account was written by a man named Fitzstephen, who, at that time, was secretary to the Archbishop of Canterbury Thomas à Beckett, and reads as follows: "(...) when the great fenne or moore (which watereth the walles of the citie on the North side) is frozen, many young men play upon the yce, some striding as wide as they may, doe slide swiftly (...) some tye bones to their feete, and under their heeles, and shoving themselves by a little picked staffe, doe slide as swiftly as birde flyeth in the aire, or an arrow out of a crossbow. Sometime two runne together with poles, and hitting one the other, eyther one or both doe fall, not without hurt; some break their armes, some their legs, but youth desirous of glorie, in this sort exerciseth it selfe against time of warre (...)". From this description it appears that it is likely that in the 12th century ice skates with metal blades did not yet exist.

In the 19th century, when archaeology became a science, these bones were found at several places in Europe when making excavations. Generally they concern bones out of the legs of cattle like horses, cows and sheep. They were made suitable for gliding by flattening one side and drilling holes athwart for fastening them with laces. Further research has made clear that the use of bones as gliders under sledges and feet in northern Europe has been wide spread.

And this from a more recent era: 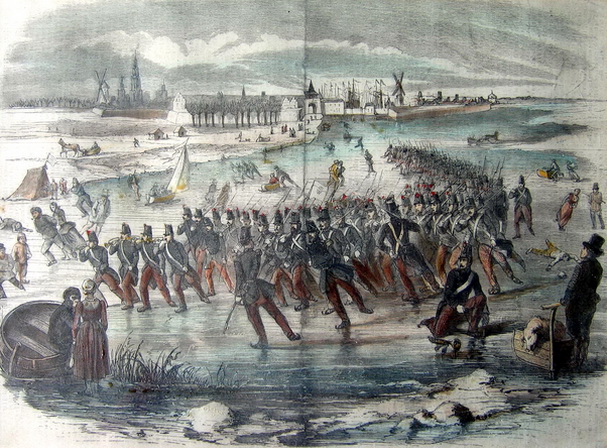 Though the enemy could iron their boots and thus walk on the slippery surface they had few chances against the defenders that moved around at great speed on their ice skates. The picture shows that regiments were drilled to move on frozen water, here on the River Merwede before the city of Dordrecht.

And finally, the word "glis" for the skate is not to be confused with glis glis, which is an edible dormouse.