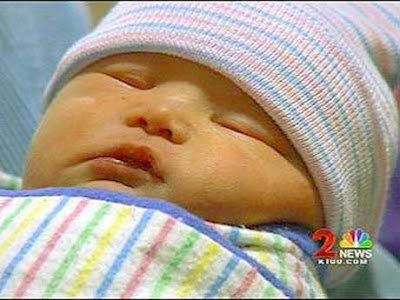 In 2009-10 I accumulated about a dozen links about Sarah Palin's pregnancy with Trig, planning to leave it all in a folder and not waste time writing it up unless she declared formally as a presidential candidate.

But today I read an extensive commentary from a neonatologist who opined that the photo above is not consistent with Trig having been born 12 hours earlier.


This baby looks to be about 1-2 months old and doesn’t look premature. Premature babies don’t have a lot of subcutaneous fat. This baby is chubby. He has epicanthal folds, flat nasal bridge and a recessed chin, which are suggestive of Down syndrome. Down syndrome babies can be chubby, but if they’re premature, it’s not so prominent...

... the baby does not look plethoric (ruddy) and may look just slightly jaundiced. Most babies are born with extra red blood cells and look ruddy at birth. This is especially true of preemies because their skin is thinner. As that extra blood is broken down, it releases bilirubin, a pigment that turns the skin yellow. At 24 hours of age, most babies will still be ruddy. Visible jaundice usually develops between 24 and 72 hours of age.

Another clue to me is the absence of milia. Milia are tiny white bumps that are usually seen on the nose, cheeks and chin. They are caused by dead skin clogging up the pores and are a normal finding in newborns that can persist for a few weeks. Most newly born babies will have some of this...

One more thing that may be missing from this picture is lanugo. This is hair that we see mostly on the arms and back, but also often on the cheeks of premature babies. It disappears after about 35 weeks so it doesn’t precisely age this baby, but does suggest an age greater than 35 weeks...

These pictures of Trig appear to show a full term size baby who was probably born a month or so ago. I base these conclusions on skin color and the imperfect ICD measurements. None of these findings are absolute, as babies can vary in size and color, but if I had to bet money, I’d say that Trig wasn’t born yesterday, so to speak, in these pictures.

Enough. Those interested in such things can go to the link, via The Dish.