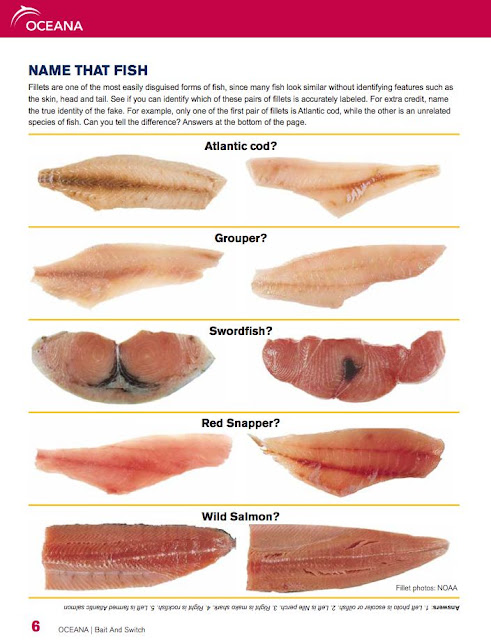 "Seafood fraud" is a "bait and switch" that's worth knowing about.  It's recently been discussed in the New York Times and at Huffington Post, but both are just citing reports from a nonprofit group called Oceana, which has an excellent pdf on the subject:

Seafood fraud
Here are some excerpts from Oceana's website.


Oceana, the largest international advocacy group working solely to protect the world’s oceans, today launched its new campaign to Stop Seafood Fraud at The National Press Club in Washington, D.C. At the press briefing, Oceana and other experts explained how seafood fraud can come in many different forms – from mislabeling fish and falsifying documents to adding too much ice to packaging – and how it hurts our oceans, wallets and health...

The report found that while 84 percent of the seafood eaten in the United States is imported, only two percent is currently inspected and less than 0.001 percent specifically for fraud. In fact, recent studies have found that seafood may be mislabeled as often as 25 to 70 percent of the time for fish like red snapper, wild salmon and Atlantic cod, disguising species that are less desirable, cheaper or more readily available...


Seafood fraud can directly threaten human health. Swapping one fish species for another that may be riddled with contaminants, toxins or allergens can make people sick.

Seafood fraud creates a market for illegal fishing by making it easy to launder illegally caught seafood products through the U.S. market. This undermines conservation efforts to prevent overfishing and accidental capture of at-risk species and hurts honest fishermen.

Consumers obviously can't DNA-test their purchases, but one tip offered is to favor purchasing filets with head and scales in place, rather than fish which has been "processed", where the identity can be disguised at any point in the chain.

The pdf highlighted and linked above is excellent.  Start with that source if this topic interests you at all.  A hat tip to the "crazy cat lady" for the heads-up on this.