"Michele Bachmann is the female candidate for people who find Sarah Palin too intellectual."

Quote by Bill Maher, via Daily Kos.  Here are excerpts from "Why Palin is good for Bachmann," from the Washington Post:


While Bachmann is often seen as Palin Lite, keen political observers note that she’s better on her feet, a sharper speaker and, when you drill down to it, has a more attractive profile. 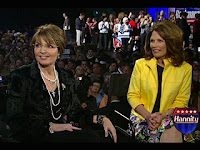 Bachmann also has the luxury of building her own brand over the next few months. And because we know she can raise money and attract attention, that image will be presented for the American people to make a decision about her.

Basically: If Bachmann can come off as a more serious, more reasoned and smarter politician than Palin, she could help herself immensely in the actual presidential race, not the fantasy sweepstakes currently occuring among Republican candidates. And Palin’s bus tour gives Bachmann a chance to effectively draw that contrast.