The U.S. is one of few countries that won't ban land mines 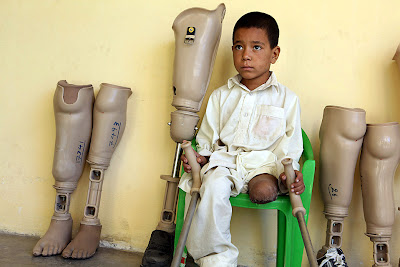 Excerpts from an incisive essay last month by Bill Moyers, regarding the victims of land mines, 75-80% of whom are civilians:


The United States has not actively used land mines since the first Gulf War in 1991, but we still possess some 10-15 million of them, making us the third-largest stockpiler in the world, behind China and Russia. Like those two countries, we have refused to sign an international agreement banning the manufacture, stockpiling and use of land mines. Since 1987, 156 other nations have signed it, including every country in NATO. Among that 156, more than 40 million mines have been destroyed...

The Nobel Committee said that part of the reason it was giving the Peace Prize to President Obama was for his respect of international law and his efforts at disarmament. And twice in his Nobel lecture, the president spoke of how often more civilians than soldiers die in a war. Then he said this:


"I believe that all nations, strong and weak alike, must adhere to standards that govern the use of force. I, like any head of state, reserve the right to act unilaterally if necessary to defend my nation. Nevertheless, I am convinced that adhering to standards strengthens those who do, and isolates -- and weakens -- those who don't."


And still the land mine treaty goes unsigned by the government he leads. Go figure.