Attention humans: You need not fear the EATR robots! 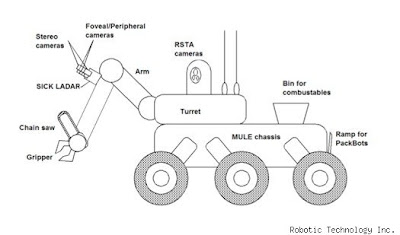 I don't know how I missed this when the news was announced this summer. I just now found it in the September Harper's Magazine:

"The U.S. military reported progress in its cyborg-insect program and in building robos that can power themselves by eating the bodies of those they kill; the developers have promised that all "EATR" robots will be told not to eat people."

The EATR ("Energetically Autonomous Tactical Robot")... "is an autonomous robotic platform able to perform long-range, long-endurance military missions without the need for manual or conventional re-fueling. The patent pending robotic system can find, ingest and extract energy from biomass in the environment, as well as use conventional and alternative fuels (such as gasoline, diesel, propane and solar) when suitable."

The creators (Robotics Technology Inc.) have responded to the expected public criticism:

"We completely understand the public's concern about futuristic robots feeding on the human population, but that is not our mission..." 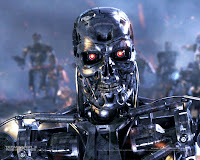 They also note that desecration of the dead is a war crime under Article 15 of the Geneva Conventions. No mention is made of whether eating the living a war crime. Not that it matters, really. These robots will be told not to eat people. What could possibly go wrong?

Oh. Other than that, I mean.