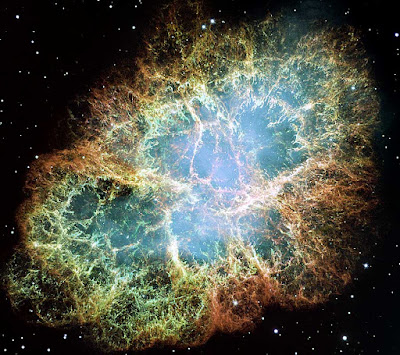 On July 4, 1054 A.D., Chinese astronomers noted a "guest star" in the constellation Taurus; Simon Mitton lists 5 independent preserved Far-East records of this event (one of 75 authentic guest stars - novae and supernovae, excluding comets - systematically recorded by Chinese astronomers between 532 B.C. and 1064 A.D., according to Simon Mitton). This star became about 4 times brighter than Venus in its brightest light, or about mag -6, and was visible in daylight for 23 days...

It was probably also recorded by Anasazi Indian artists (in present-day Arizona and New Mexico), as findings in Navaho Canyon and White Mesa (both AZ, found 1953-54 by William C. Miller) as well as in the Chaco Canyon National Park (NM) indicate... [note the pictograph]

Strangely enough, it seems that at least almost no records of European or Arab observations of the supernova have survived to modern times...

Much more discussion at the link. Photo from APOD, where it is noted that at the very center of the nebula is a pulsar - a neutron star as massive as our Sun, but only as big as a small town.