Two owls on a stump 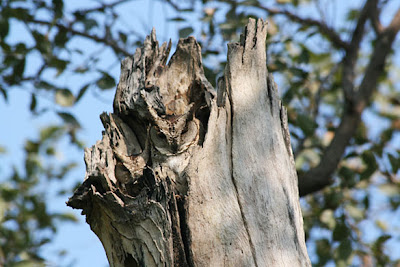 Scops-owls on a tree stump. These were photographed in India, but they are widespread in the Old World. Wiki says they are "colored in various brownish hues, sometimes with a lighter underside and/or face, which helps to camouflage them against the bark of trees." I'll say - it took me a long time to decide there were two owls in this photo.

This is a football weekend, so there's no time this morning to look up the origin of the interesting name. Or that of the even-more-curiously-named "flammulated owl."

Second addendum: "The Flammulated Owl was first described by German scientist Johann Jacob Kaup in 1852. The word flammeolus is latin for 'flame' or 'flame-shaped', refering to it's unique colouration" - found at The Owl Pages.