Today I learned what a "hair pencil" is 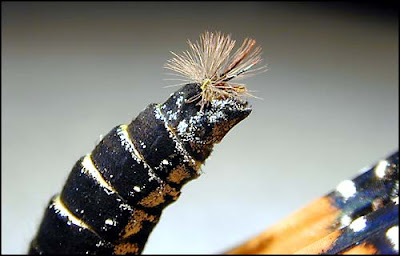 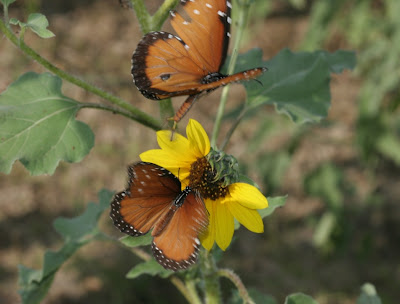 "The Queen is known for its definite courtship display which must be rigidly followed by both sexes. The male chases the female and overtakes her from above. He brushes her antennae with his abdominal hairpencils, which disseminate scent, and induces the female to alight. The male continues to hover over the female, hairpencils still active, until the female becomes submissive..."

The structures in Monarchs and their purpose are explained in this passage at MonarchWatch:

"There are many mysteries concerning monarchs. One of these involves chemical communication, or perhaps the lack of it. Monarchs have the alar glands (two black "pouches" on a male's wings) and hairpencils seen in other Danaines, but they appear to have lost the pheromones and the behavior associated with their use in courtship. Monarchs are rarely seen extending their hairpencils either prior to or during courtship. The pouches appear to contain no pheromones nor are there any to be found on the hairpencils themselves. In fact, mating does not appear to involve any chemical communication at all.

"Since monarchs seldom extend their hairpencils, most monarch observers have never seen this structure. The hairpencils are telescoping tubes, or sheaths, that are extended and retracted by the butterfly through fluid pressure and muscle contractions. To see this feature, obtain an older male monarch. While holding the monarch with one hand use the thumb and forefinger of the other hand to gently squeeze the last three segments of the abdomen. With some practice, you can get the claspers to open and the hairpencils to fan out as shown [in the lower photo above]."

The etymology of the term was explained in an email distributed today by Mike Quinn at the North American Butterfly Association: