An illustration by William Blake 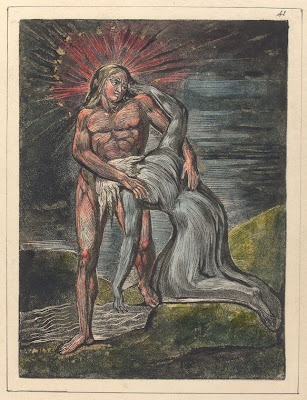 While researching my post about "Jerusalem," I encountered the above illustration from the online Digital Gallery of the New York Public Library. The page there only lists it as from "William Blake: Illustrated Books", with this caption: [Two figures....] (1804 [i.e. 1808?] ).

The figures in the illustration appear to be rather salaciously posed, leading me to wonder what in the world Blake was trying to depict. My knowledge of art is abysmal, and all I found while searching tonight was this description at Wiki of "Milton, A Poem" written at about this time, in which

Blake sees a skylark, which mutates into a twelve year old girl, who he thinks is one of his own muses. He invites her into his cottage to meet his wife. The girl states that she is actually looking for Milton. Milton then descends to meet with her, and in an apocalyptic scene he is eventually unified with the girl, who is identified as Ololon and becomes his own feminine aspect.

I have no idea whether that is what is being shown. Perhaps someone reading this blog with a better grounding in the fine arts will be able to put this in context.

p.s. - the NYPL Digital Galleries are a remarkable resource!

Update: Hat tip to Anonymous for finding an analysis of the plate in Google Books. It's long and complicated, so I won't insert here; those interested can pursue the matter.