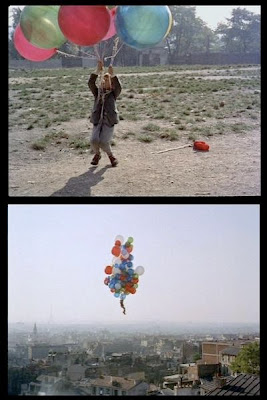 I hadn't blogged the "balloon boy" because it's not a "TYWK," but after seeing the photo above at Old Hollywood, I was reminded of a recent Reddit thread which is relevant, little known, and not discussed in the mainstream media frenzy re the recent stunt.

Citing a Mythbusters episode, the thread notes that a helium balloon doesn't have sufficient displacement to lift a weight equivalent to a small child:

It would require such a large number of balloons (3,500) to lift an average four-year-old girl of 44 pounds (20 kg) just a few feet off the ground that there is no way the myth could have happened unintentionally.