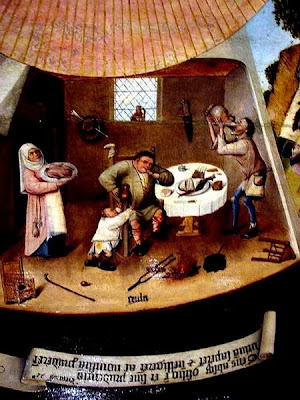 For the "smorgasbord" series of posts I always embed a photo of food, or someone eating, because the post is an invitation to you to sample the fares offered. (Today there are so many that I've embedded Bosch's depiction of Gluttony.)

From my standpoint, however, what would be needed would be a picture of "egestion" because this is how I get rid of accumulated links. These are items that either don't require a photo, or can be explained in a sentence or two, or are otherwise not worthy of the time for a full independent post, but are still interesting enough to be blogworthy.

The word "ostrobogulous" is defined as part of a tribute to Professor Christian Kay, who has spent an incredible 42 years compiling the forthcoming Historical Thesaurus of the Oxford English Dictionary.

Mental Floss offers a selection of twelve of the million-dollar questions from the television program Who Wants To Be A Millionaire? (I got 9/12)

A golfer achieves a hole-in-one when his ball richochets off another ball and into the cup.

A column at Huffington Post argues that journalism schools are unnecessary and should be eliminated.

A Swedish couple vacationing in Italy wanted to visit the island of Capri, but punched "Carpi" into their GPS and were led 400 miles astray.

Citigroup wants to pay $100,000,000 in bonuses to their top executives. No. My mistake. They want to award the hundred million $ to one man.

Photo of a 1930s rural woman suckling a fawn and a baby simultaneously.

51 headless Vikings discovered in England. They were also buried naked.

Britain's biggest (64 lb) and "best-loved" carp has died. It had been caught (and released) 63 times in its 13-year life. Photo and audio report at the BBC link.

Cahokia is a very cool place deserving of a full blog post. For the moment try this Salon post (ignore the sensationalist title).

TSA employees confiscate a child's toy weapons, then play with them.

A woman spent $32,000 for the entire business section of a El Al flight so that her dog could set next to her and wouldn't suffer from severe anxiety in the cargo hold.

Language Log offers an academic discussion of the phrase "f**king shut the f**k up" - complete with a sentence diagram!

A man robbed a 3-year-old toddler of her purse.

The Hugo Award Winners for 2009 have been announced. Before I started blogging I used to read from the Hugo list every year; I have some catching up to do. Here's a list of winners for the past 50 years.

A man hurled his girlfriend through a shop window in London's West End. He died when he accidentally impaled himself on a shard of glass from the broken window.

Ian's Shoelace Site offers 33 different methods for tying the laces on your shoes.

Wired offers practical tips on how to disappear. A long and fascinating article about "missing persons" - legal and illegal.

Germany's monetary hyperinflation of the 1920s summarized at Der Spiegel.

A neo-Nazi "hate blogger" has been outed as an FBI agent provocateur.

The website "Gives Me Hope" posts brief anecdotes about ephemeral events that - per the title - give people hope about the future of humanity.

The funniest joke at this year's Edinburgh Fringe festival... isn't very funny. #2 and #5 are pretty good.

Read this article and the appended comments (pro- and con-) before you decide re visiting the Grand Canyon Skywalk.

Wanderin' Weeta writes a fascinating nature-based blog. The link goes to a sample entry about bryozoan colonies and sea slugs.

The People of Walmart website is like a grisly car accident that you really don't want to look at, but can't help yourself...

I have occasionally seen photos of deer, moose, etc. hanging from the telephone or electrical wires. People argue whether they get there after being hit by cars/trains, or as a result of pranks. Here's a photo from the 1940s of a human in a similar situation. The cause is obvious. Posted here so the photo is "below the fold" away from sensitive eyes.

When a Johns Hopkins student confronted a burglar, he armed himself with his Samurai sword. After two swings, it was all over.

A man found a metal thingy in his back yard and thought it was part of a lawn mower. It was an anti-tank grenade. A live one.

If you haven't heard from the MacArthur Foundation yet, then you didn't win one of their "genius grants." Here's a list of the people who did.

The man who won an eBay auction for a dinner with Sarah Palin is a defense contractor. Why am I not surprised?

A man teaching his girlfriend about firearms safety shot himself in the head.

If any men out there have had unprotected sex with a pregnant woman confident that you couldn't impregnate someone already pregnant, think again. "Superfetation" is rare but possible.

A man killed his wife and his five kids, but didn't kill himself because "if you kill yourself, you're not going to heaven."

Rotten Tomatoes is a site for community rating and ranking of movies. Here they list the ten movies with the lowest ratings in the past 10 years. I haven't seen any of them.

Bloody nipples. A photo gallery of a complication of distance running.

A man in Germany tried to "moon" a railroad train, but his trousers got hooked on the passing carriage, dragging him along. "He advised others not to try the same thing."

"How skiing changed the Alps" - a photoessay at The Telegraph.

General Electric is worried by reports that the dye used in association with an MRI procedure can induce severe renal disease.

The BBC explains "crash for cash" schemes in which accidents are purposely caused in roundabouts. One man caused 93 of them and earned £46,000 in the process.

"Charlie No-Face" was an unfortunate man whose face was destroyed by lightning and had to keep out of the public view for 60 years.

Eudora Welty was a photographer as well as a writer.

The strange properties of moon dust.