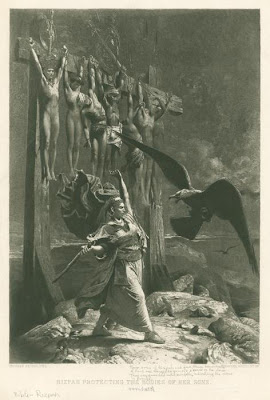 A famine lasting three years hit Israel during the earlier half of David's reign at Jerusalem. This calamity was believed to have happened because of "Saul and for his bloody house, because he slew the Gibeonites." The Gibeonites were not Israelites, but the remnant of the Amorites, which Saul pursued from within Israel. David inquired of the Gibeonites what satisfaction they demanded, and was answered that nothing would compensate for the wrong Saul had done to them but the death of seven of Saul's sons. (2 Samuel 21:1-6)

David accordingly delivered up to them the two sons of Rizpah and five of the sons of Merab, Saul's eldest daughter, whom she bore to Adriel. These the Gibeonites put to death, and hung up their bodies at the sanctuary at Gibeah. Rizpah thereupon took her place on the rock of Gibeah, and for five months watched the suspended bodies of her children, to prevent them from being devoured by the beasts and birds of prey, till they were at length taken down and buried by David.

In other cultures (Indian subcontinent, North American Native American), the bodies would be intentionally offered to raptors for consumption in a "sky burial." An interesting divergence of viewpoints.

Photo of the 1873 illustration by George Becker found at (exclamation mark).