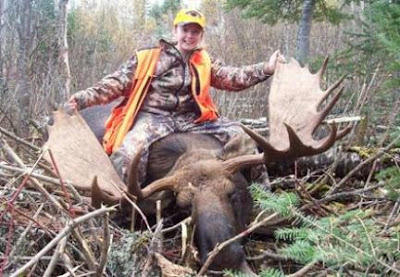 She’s apparently the youngest hunter to legally kill a moose in Minnesota since at least 1922 when the state began restricting moose hunting, said Lou Cornicelli of the Department of Natural Resources. The Legislature last year reduced the minimum age to hunt moose from 16 to 10, opening the door for young hunters like Kelly. And she was the youngest of 104 hunters who registered a moose this season, which ended Sunday.

"I feel really happy and proud,’’ Kelly said Wednesday. "Shooting a moose is an accomplishment whether you’re 12 or 38 – you’re going to put the same amount of effort into it. It’s a big sense of accomplishment because I am 12. The moose is as wide as I am tall. I can sit inside his antlers.’’

Kelly was accompanied by her dad, Jeff, who couldn’t hunt – or even help her call in a moose – because he got a license, and a moose three years ago. A limited number of licenses are issued in a lottery drawing, and since 1991 hunters have been allowed just one in a lifetime.

I have mixed feelings about this story...

More details at the StarTribune.