When the plague victims began to recover 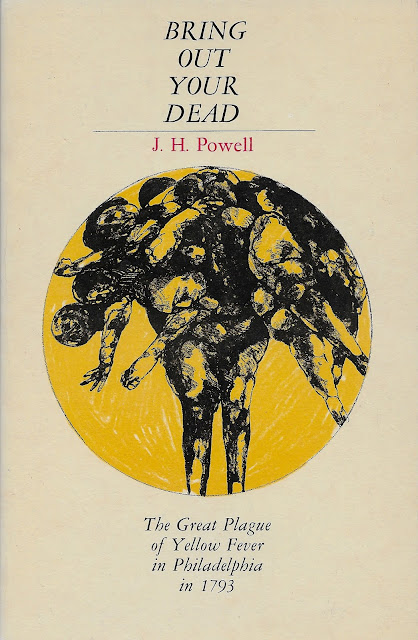 Philadelphia in 1793 was the nation's capital while Washington was being built; it had 55,000 residents and was a major port, with traffic from subtropical islands where yellow fever was endemic.  Yellow fever had been part of the Philadelphia's history back to its founding by William Penn; they knew it as "the Barbados distemper."

This book discusses in great detail the yellow fever epidemic that devastated the city that year, with a focus on Benjamin Rush, the famous physician.  He was a signer of the Declaration of Independence. a participant in the Continental Congress, and an overall civic leader for the city of Philadelphia.  Rush read descriptions of yellow fever in Virginia in 1741, where the observation had been made that the abdominal viscera of the victims were filled with blood, and "must be cleaned out by immediate evacuation."  Rush decided to apply this basic principle in 1793, even though other physicians were beginning to be wary of bloodletting and purges.

Here are some excerpts from the book:


"An ill-timed scrupulousness about the weakness of the body" on the part of a physicain was fatal, Rush read.  It was that very weakness which made evacuations necessary... The physician should produce these evacuations by "lenitive chologoque purges."  Mitchell [from 1741] asserted boldly, "I have given a purge... when the pulse has been so low, that it could hardly be felt, and the debility extreme, yet both one and the other have been restored by it."

"Bloodletting he had generally tried, but in small amounts.  Now he realized he must take enough blood to remove all inflammatory stimulus..."

[not everyone agreed]  "Physicians realized he was approaching the realms of God's natural order, and approaching with violence; laymen realized their simple cures were not without effect..."

"Dr. Joseph Goss of Second Street averred that he had treated above sixty patients with considerable success by inducing a heavy sweat for twelve hours, giving ditiny tea with molasses and a decoction of twelve turnips, one endive, and eight carrots boiled in a gallon of water down to three quarts, a clyster every four or five hours, balsam or camphor for coughing, and ipecacuahna for nausea."

"Calamities multiplied beyond number.  A man named Collins buried his wife, two daughters, a son, his son's wife and child; he married again, buried his new wife, and died himself."

[as the epidemic raged] "Soon Rush and his pupils gave up even elementary precautions.  They threw away their vinegar rags [for face masks], and when there were not enough bowls for his pupils to use, the young men would take patients out to the front yard on Walnut Street and bleed them as they stood in the open air.  The blood flowed freely on the ground, dried and putrefied there, stank hideously, drew flies and mosquitoes..."

"Rush was, a contemporary wrote, "wonderfully entangled in the web of his honest sophistry."  It was sophistry of his own making.  He was not following old errors; he was consciously, proudly departing from them into new and greater errors of his own.  He was not misled by others; indeed, others whom he should have respected argued forcefully against him.  He was not justified by his observations; his observations... even as he records them, show how wrong he was.  Yet as he watched death a thousand times that fall, he continued to believe himself right, his cure successful, his patients helped."

"It is a still more difficult matter to explain how anyone he treated survived Rush's ministrations, particularly when we learn that he, like his contemporaries, thought there was about twice as much blood in the human body as there really is.  Rush was willing to take as much as a quart of blood at a time, and to repeat this process several times in two or three days.  When his great purge caused the bowels to bleed, he thought this merely an additional benefit supplementing his venesection.  The more blood loss, the better.  He urged that bleeding be continued at intervals until "four-fifths of the blood contained in the body are drawn away."  Dr. Physick was bled twenty-two times, Dr James Mease lost 162 ounces..."

"But it was not the fact of death that people dreaded; death was familiar to them all.  Every year, without a plague, a quarter of all children born died before they learned to walk; half of all mankind perished before the age of nine.  What shocked people was a sudden mass of death..."

This isn't a book that I would recommend to everyone, because it is way too detailed for a general audience.  But to those with careers in medicine it is just startlingly interesting.  What amazes me is that patients suffering from a disease characterized by vomiting and bloody diarrhea, on the verge of dying of hypovolemic shock, were "treated" with emetics, laxatives, and massive bloodletting.  It boggles the modern mind.

I have to conclude with the best phrase in the book:


"...Benjamin Franklin's observation that in Barbados the inhabitants began to recover from the fever only after the doctors had run out of medicine."