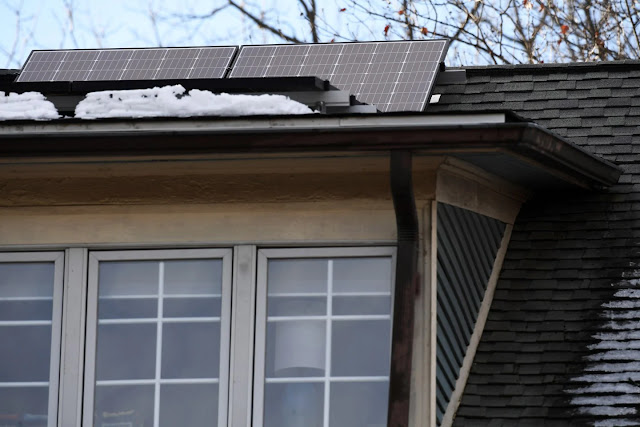 
It is a debate playing out in towns and cities across the country, as the priorities of historic districts collide with the growing enthusiasm for clean energy. From the Great Lakes to the Black Hills, property owners worried about climate change find themselves debating the fine points of dormer contours and shingle color with preservationists worried about architectural integrity.

The conflict is especially acute in Washington, where a concerted push for solar is taking place amid historic preservation agencies that in their territorial and procedural complexity rival the Seven Kingdoms of Westeros. Some permit seekers have found themselves snarled for months, or even years, trying to convince regulators of the aesthetic merits of proposed solar installations...

Green said she has no problem with existing historic district regulations that allow solar cells on flat roofs, where they cannot be seen from the street. But she believes it would be a mistake to permit installations on sloped roofs like those visible on the facades of many bungalows in her neighborhood...

“I think people just get stuck in trying to preserve a certain look when, gosh, I mean, we do have to evolve,” Stanslaw said. “If that is going to require that we change our views on what is aesthetically pleasing, we really have to find some common ground.”

When we moved into a Madison subdivision twenty years ago, the neighborhood association guidelines allowed solar panels but advised placing them in inconspicuous locations, out of view from the street.  This past year one neighbor retrofitted his house and garage roofs with dozens of panels directly facing the street, with no objections from anyone.  But perhaps a 40-year old subdivision is different from a 200-year-old one.