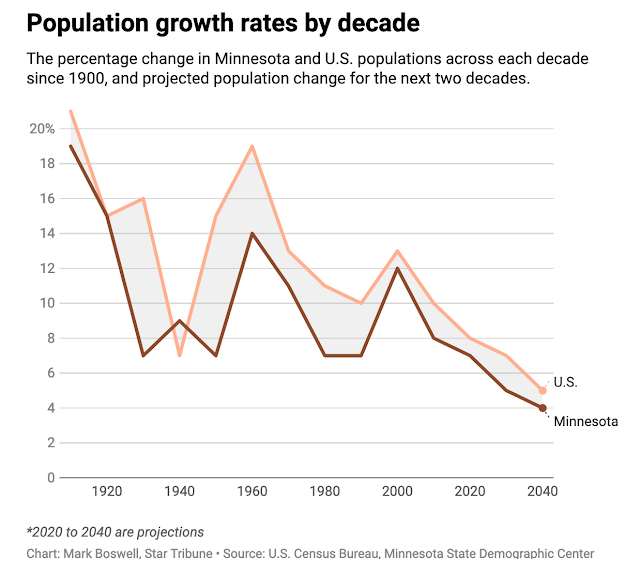 Minnesota’s population will grow more slowly than ever in the 2020s, a development that will tug on the lives and fortunes of everyone in the state.

The Minnesota economy will also be squeezed as the last baby boomers retire in the decade. The 3 million-person labor force will essentially stop growing in the first five years of the 2020s, demographers say, and pick up only slightly after that.

This leveling off is already being felt across the state. Job vacancies have outnumbered the unemployed in Minnesota for two years. Businesses, governments and ordinary people find it’s harder to get things done. Hiring is especially challenging at restaurants, factories, schools and hospitals. Things aren’t delivered on time.

Such difficulties are mainly seen as effects from an economic upturn that, having started after the 2008-09 recession, has lasted longer than any other. But they’re also a product of the less-understood slowing of population growth...

This pattern is projected to continue into the 2030s and 2040s. There were so many baby boomers that their deaths from old age will offset the number of people being born or immigrating. By 2034, the Census Bureau says there will be more Americans over 65 than under 18. Similar challenges exist around the world. As populations become larger, it’s harder to sustain previous high rates of growth. And as more people around the world prospered, newer generations didn’t feel the need to have the high numbers of children that previous generations did.

Remember this trend when you hear politicians bragging about how they are responsible for falling unemployment.