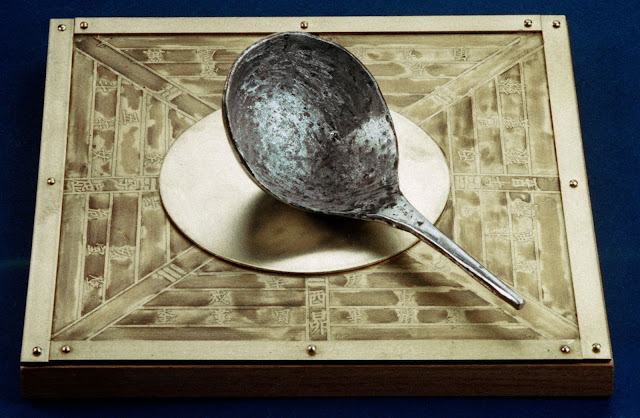 Excerpts from an article in the always-interesting Hakai magazine:


On a bronze plate, the little metal spoon balances exquisitely on its bowl. Each time it’s tossed or spun, it comes to rest with its neck aiming south. This is a replica of the aptly named south pointing spoon, thought to be the first magnetized object ever used to tell direction. And it was the crucial precursor to the magnetic compass, one of the most important inventions in maritime history.

The spoon’s first mention is in Lun Heng, a book of essays on science, myth, and literature written during China’s Han dynasty around 60 CE. The description is straightforward: “When the south pointing spoon is thrown upon the ground,” writes author Wang Chong, “it comes to rest pointing at the south.”..

By the 11th century, people had noticed that needles rubbed with lodestone also aligned north-south and were suspending magnetized needles on silk string or floating them in bowls of water. When mariners adopted these rudimentary compasses, it helped turn China into a global sea power. ..

As for why the rudimentary compass was in the shape of a spoon, Silverman says the original diviners may have made the ladle shape to mimic the Big Dipper. In that constellation, the two stars at the end of the “bowl” point to the North Star. And since the spoon’s neck pointed south, that meant its bowl pointed north—just like the Big Dipper.