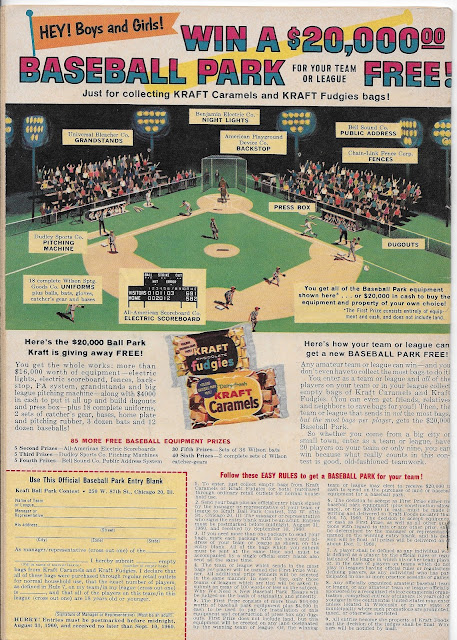 I'm in the process of doing a final re-read on my old comic book collection before selling them on eBay.  The "comic" aspects of them have disappeared over the years, but there are some other interesting features, including the advertisements.  Most of the back-cover feature ads have been for bicycles, BB guns, toys, or related comics, but the one above from 1960 was particularly interesting.

I wonder how many "Kraft Ball Parks" were constructed, and if any still exist.  Google didn't locate any for me.

Addendum:  A tip of the hat to reader krossbow, who found this story about Bentleyville, Pennsylvania:

Community life is a focal point of Bentleyville, and residents gather at Richardson Park to support local sports teams, hold graduation parties and weddings, do laps on the walking track or play on the playground.

Caramel Park is home to Bentleyville Youth Baseball. The baseball fields were built in 1960 when Bentleyville won a national contest sponsored by Kraft Corp., after residents sold more than 55,000 bags of the sweet, chewy caramels. Members of Bentleyville’s Little League baseball team were invited to New York City to appear on the Perry Como Show after they won the contest...