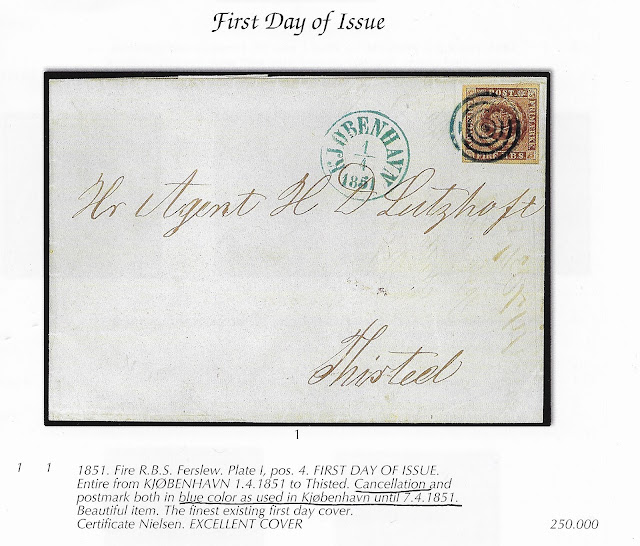 This post will likely be of interest only to stamp collectors, but before discarding some old philatelic auction catalogues, I wanted to preserve a couple items for future reference.

Cancellations are used by postal authorities as a form of revenue protection (to prevent reuse of the stamps), and to a lesser extent for administrative purposes to document where letters originated and how they were transported.  The first issues in Denmark were cancelled with four-ring "mute" cancels (with a dot in the center); clerks were instructed to center these on the stamp and did so with varying degrees of efficiency.

Shown in the top image is a philatelic rarity (prices shown in all the images are auction opening bids, expressed in IIRC Swedish or Danish kronor).  The item shown is an intact cover, cancelled on the first day the stamp was issued (April 1, 1851).  As the catalog entry notes, the cancel and the postmark are in blue ink, which was used in Copenhagen during that first week. 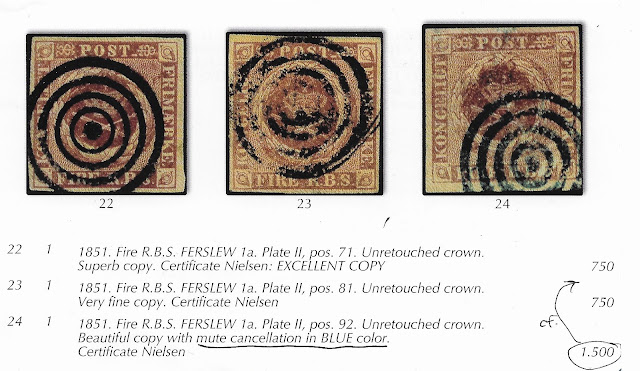 Full covers are rare because early collectors were interested only in the stamps, which were soaked or steamed off envelopes and mounted in albums.  The second image shows some individual FIRE R.B.S. stamps from that auction.  These have been "plated" by specialists, so they are identified by the plate from which the stamp was printed and even the position of the stamp on the plate.  Note that the third example is offered at a higher opening bid because of the blue cancel, which marks it as having been mailed during that first week of issue.

Another group of cancels seen especially during the first year were "manuscript" cancels, where the obliteration was performed by the postmaster by hand using an ink pen (or, as in the first example ink and chalk).   I believe these were more commonly done is smaller rural post offices, and were officially frowned upon (and eventually banned), so they also carry a premium in the modern marketplace. 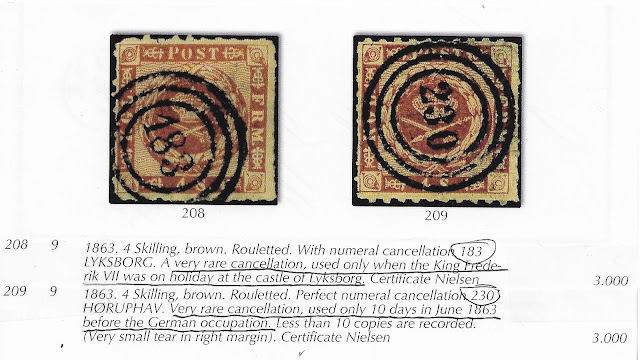 The "mute" cancels were followed in October of 1852 by "numeral" cancels, still with obliterating rings, but now with numbers that corresponded to specific post offices or postal facilities.  Reference books provide rarity values for each of the numbers (those from small villages being especially uncommon, and sought by collectors).  Even rarer than the small town ones are the two shown above: the "183" used only when the king was in residence at his castle, and the "230" used briefly before a German invasion (these examples on 4-skilling stamps with wavy spandrels issued in 1863).

And one final uncommon item.   A few Fire R.B.S. stamps received "rebellion" cancels ("oprørsstempel" - think "uproar") from the Schleswig-Holstein rebellion of 1848-51.  The "first Schleswig war" ended about the time that adhesive postal stamps were introduced, but I think what happened was that some of the cancellers were retained and used by Danish postoffices after the conflict ended.  The opening bid shows how uncommon good examples are.