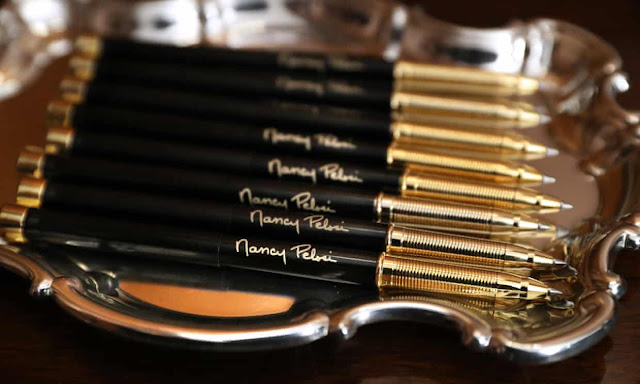 They are in the news today because of the hoopla surrounding Pelosi's signing of the articles of impeachment.


The House speaker sparked the opposing party’s ire on Wednesday when she used a remarkable number of writing implements – more than three trays littered with them – to sign her name on the articles of impeachment against Donald Trump.

The pens, engraved with her signature, were intended as souvenirs for Pelosi’s allies. She carefully signed the documents, apparently stroke by stroke, using different pens for each portion of her signature. Then she distributed them to impeachment managers and committee members.

The process has such a long history that it has become a tradition:


Barack Obama used 22 pens to sign his landmark healthcare law. Lyndon Johnson is said to have used 75 to sign the Civil Rights Act. The tradition goes back to at least Franklin Roosevelt, as Time explained in 2010: “The pen used to sign legislation itself becomes a historical artifact. The more pens a president uses, the more thank-you gifts he can offer to those who helped create that piece of history.”

It also happens in state legislatures: 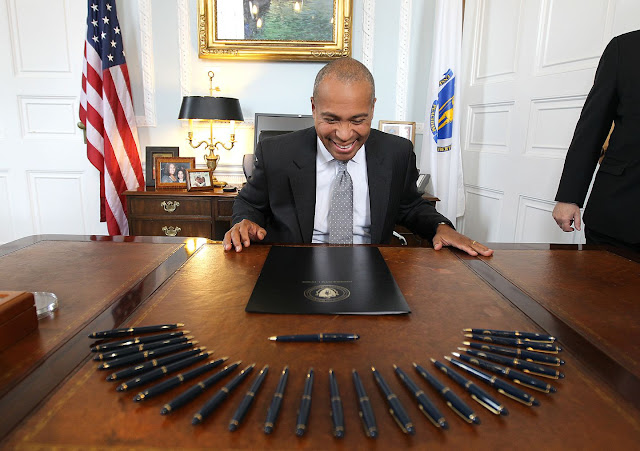 And they are available for purchase online.


There are actually three main types of pens typically called presidential pens. The first and perhaps the most well-known are bill signing pens. These are the pen or pens used by the President when he signs a bill into law during a signing ceremony. The second type is pens distributed by The White House or government agencies, as souvenirs or gifts. The third type is pens given out during presidential campaigns or during visits to events and locations by the President during his term of office... [the record for most pens] belongs to President Lyndon Johnson, who in 1964 signed the Civil Rights Act using a whopping 75 pens.

Ridiculous.  Stop spending my tax money on gifts to your friends.  Maybe I'm just in a bad mood.  Get off my lawn.