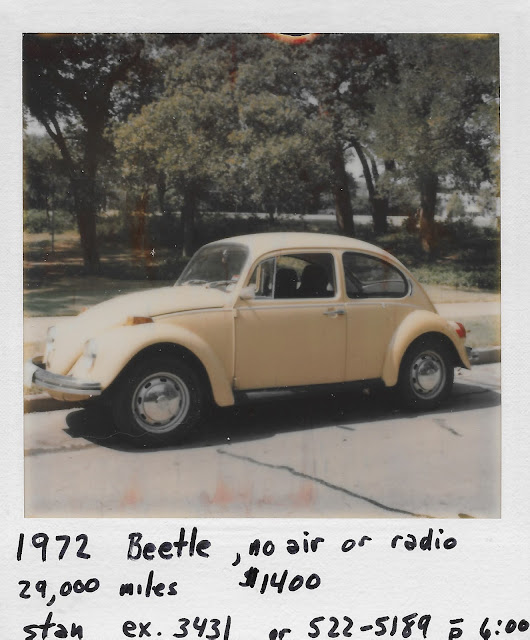 In 1972 I was in the first year of my first full-time job when my 1966 Ford began to sputter on the highway, then died and wouldn't restart.  I had it towed to a mechanic, who discovered that someone had poured sugar into my gas tank.  The cost to redrill the cylinders and clean the fuel system was more than the value of the car, so I sold it for basically scrap metal.

I had little savings and my salary was only $5,200/year, so I had to quickly find something cheap and reliable to get me to work.   I walked to a nearby Volkswagen dealership and was granted a loan to purchase their basic not-even-a-radio Beetle for IIRC less than $2,000.  As part of the deal, the salesperson taught me how to drive a stick shift.

That lemon yellow Beetle did its job for five years, never failing to get me where I needed to go.  When it came time to sell and I put the Polaroid above on the wall at my workplace, I discovered that people in Dallas, Texas weren't eager to buy a car with no air conditioning.  So I sold it to my mom up in Minnesota.  She drove it another 6-8 years from the distant western suburbs of Minneapolis to get to her downtown job as a burn unit nurse at the county hospital, including through every winter snowstorm.  She was so delighted with it that when she traded it in, she chose another Volkswagen.

I was reminded of this old VW when I encountered a Marketwatch article saying that the road to riches should be driven in a cheap car ("Buying new cars is like taking $40,000 and setting it on fire.")  I totally agree.