Catastrophism as an alternative to Darwinian evolution 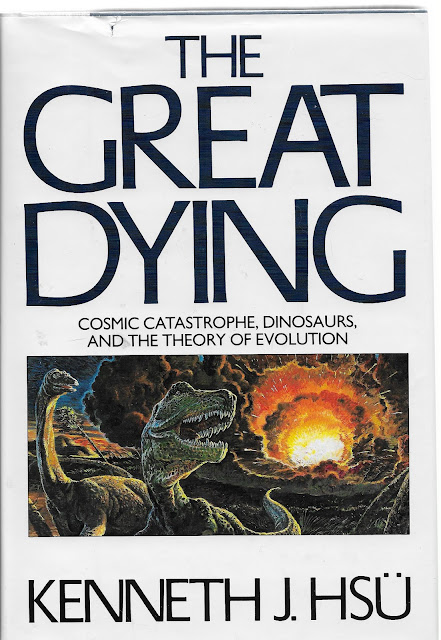 This past week I did a final re-read of a book that impressed me back in the 1980s.  The Great Dying is a deep dive into the Cretaceous-Tertiary extinction created by the Chicxulub asteroid impact that struck the Yucatan 66 million years ago.

Kenneth Hsu is a highly-qualified and award-winning geologist.  For the book's title he has borrowed a phrase now more commonly applied to the Permian-Triassic extinction, but his interest and his life's work centers on the end-Cretaceous one.  He uses the undeniable evidence of the event to argue that major shifts in evolution are often driven by catastrophic events rather than by the progressive accumulation of incremental advantageous traits.

He's not the first to address this issue.  Catastrophism was offered as a theory as soon as paleontologists discovered evidence of extinctions, was viewed favorably by Biblical scholars, and was later dialed up to 11 by Velikovsky.  It is one of many alternatives to evolution by natural selection.

Massive extinctions are fascinating events to read about.  I've heard some recent podcasts about new findings related to the Chicxulub event that left traces of iridium around the world in a layer of sterile clay.  My understanding many years ago was that the Yucutan impact disrupted the world's climate by producing either global heating or global cooling from the massive ejection of dust and water vapor and carbon dixoide into the atmosphere, and that the dying would have resulted from starvation or heat or cold intolerance.  Recent evidence of tektites half a globe away suggest that the world may have been flash-heated to cooking-to-death-all-exposed-life levels.

In any case, the argument of Hsu and other catastrophists is that these events do not result in "survival of the fittest" but rather "survival of the lucky."  One can't really argue that dinosaurs were "unfit" - they had covered the habitable terrestrial and aqueous world, were carnivores, herbivores, piscivores, and all the other vores.  They flew, swam, plodded, and ran in every non-arctic environment.  And they had survived (and evolved) for 160 million years.  Apparently there was one dinosaur - Stenonychosaurus inequalis - "whose large braincase, stereovision, and opposable thumb hinted at the potential for becoming a race of intelligent beings."  Then they all died within a time frame too short to measure accurately with geological sediment layers.   About 75% of all existing species at the end of the Mesozoic never appeared again - and they have nothing in common as unfit traits except that they were obliterated.

If one wants to say that the surviving mammals or rotifers or water bears are the result of the best "fitness", then that argument reduces down to just saying is that fitness is defined by survival and that you can't predict which organisms are the fittest now because there's no way to know what catastrophe awaits in the future.  The ones who survive will proliferate, perhaps abundantly, and then begin their own gradual evolution and speciation, not because they are fittest, but because they are the first to enter a recently-emptied ecosystem.

Personally, I don't have any difficulty incorporating both catastrophism and Darwinian gradualism into my thinking.  Natural selection is obviously operative even on very short timescales when pollution changes moth populations from white to brown, and catastrophes from floods to fires radically change ecosystems, resulting in new adaptive changes.

One reason some people ardently embrace the primacy of the principle of Darwinian "survival of the fittest" is that they want to apply it to human endeavor, arguing that their race or their culture is the result of natural social selection and other races/peoples are inferior.  And while that stance may be polticially incorrect and seldom expressed quite that way openly, one hears the same argument applied out loud to the business world - that corporations that prosper do so because they are the fittest and they deserve their prominence because they are better than their competition.  Here is Hsu's closing summary:


"We have been competitive; we have exterminated others, both our own and other species, whom we perceive to be interior, or at least of no account; and we would like to feel justified in such endeavors.  But the history of life can provide a scientific basis neither for capitalism nor for socialism, neither for Marxism nor for racism nor for the Maoism of ceaseless revolution.  The opinion that "favored races" are preserved in a struggle for existence was a speculation that has become a dangerous ideology.  We should cease to lend it a cloak of scientific respectability...

I believe we must live without pretending to know who or what is fit and not fit.  Instead, we should embrace the diversity of forms and ways that nourish life itself.  Looking back over the several billion years of our evolution, that is the closest I can come to the Tao of our existence.

For a Westerner, perhaps the essence of my perception can best be expressed by a quote from the Bible:


"I returned and saw under the sun that the race is not to the swift, nor the battle to the strong, neither yet bread to the wise, nor yet riches to men of understanding, nor yet favor to men of skill; but time and chance happeneth to them all. "

I've not added this to my "recommended books" category in the blog because it is a detailed longread probably better viewed as a textbook than as casual reading material.  And there likely have been some better books on the subject since this one was published; readers are invited to suggest others.