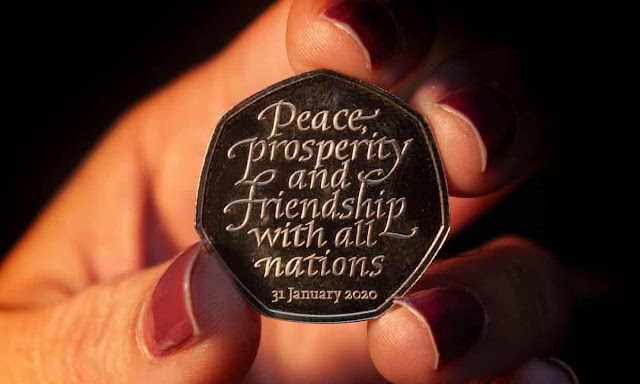 In English language punctuation, a serial comma or series comma (also called Oxford comma and Harvard comma) is a comma placed immediately before the coordinating conjunction (usually and or or) in a series of three or more terms.

The style that always uses the serial comma may be less likely to result in ambiguity. Consider the apocryphal book dedication quoted by Teresa Nielsen Hayden:


To my parents, Ayn Rand and God.

An example collected by Nielsen Hayden was found in a newspaper account of a documentary about Merle Haggard:


Among those interviewed were his two ex-wives, Kris Kristofferson and Robert Duvall.

Related:  Is the semicolon an endangered symbol?

Reposted from 2017 to add the photo above, from an article in The Guardian reporting on the controversy over the absence of an Oxford comma on the new Brexit 50p coin:


It is a debate that has torn the nation in two, ripped friends and family apart, and entrenched deep and uncrossable lines throughout the land. Should the Royal Mint have used an Oxford comma on its Brexit 50p piece?..

... early responses include His Dark Materials novelist Philip Pullman’s criticism of its punctuation.


“The ‘Brexit’ 50p coin is missing an Oxford comma, and should be boycotted by all literate people,” wrote the novelist on Twitter, while Times Literary Supplement editor Stig Abell wrote that, while it was “not perhaps the only objection” to the Brexit-celebrating coin, “the lack of a comma after ‘prosperity’ is killing me”.

It seems appropriate to close with this observation by Lynne Truss, author of the delightful style guide Eats, Shoots & Leaves*:


"There are people who embrace the Oxford comma, and people who don't, and I'll just say this: never get between these people when drink has been taken."

*read this book if you enjoy the English language.