This is a most interesting roof 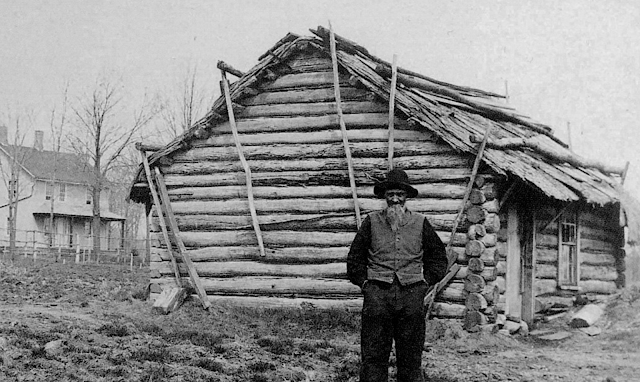 The image, from the Minnesota Historical Society (cropped for size), shows a man in Waconia, Minnesota in 1885, standing in front of his original log cabin (probably dating from the 1850s, with his newer home in the background).  The article discussed how early settlers survived the cold winter temperatures, but what interested me was how he had assembled his roof.

I'm quite familiar with Scandinavian sod roofs, but this is different - those large transverse logs are not features of sod roofs I've seen.  So I first looked at A Woodsrunner's Diary, my favorite "living history" blog, but couldn't find anything there.  My next stop was Google Images, where various combinations of key words finally yielded this (image cropped for style) - 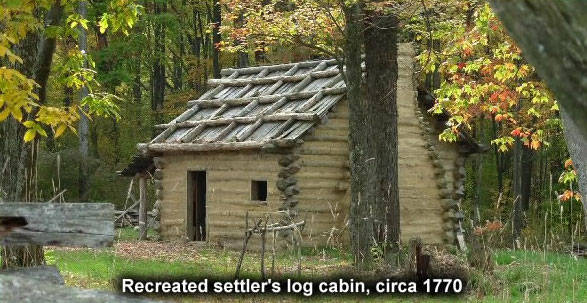 "The roof employs a “weight pole” system consisting of split oaken clapboards held down by the weight of heavy poles laid upon them.  Nails, which were scarce and expensive in the late 18th century, were not employed in such a roof."

- which gave me a new search term, which led me to another living history site depicting weight poles being applied to a roof -

I found a closer view at a stock photo site which I can't afford to purchase for embedding, with the weight poles secured in place with large rocks.

Logs on the roof explained - but what's the deal with the saplings on the side of the house?  I'm guessing it all comes down to nails, which were a precious commodity for early settlers.  I have read that when pioneers or homesteaders upgraded from their intial hovels to better houses, they would burn the log shanty in order to extract the nails for reuse.

Mr. Peterson in the top photo covered his roof with shingles or shakes (or maybe slabs of tree bark?).  He didn't have the necessary nails to secure each of those, so he placed the logs transversely.  But then you need something to secure the logs.  In the stock image linked above, the logs are secured in place with what look like railroad spikes.  Probably Mr. Peterson didn't have those (or didn't have an underlying beam to drive the spikes into), so he used the saplings at the sides of the house.  But I'm not sure how the saplings are secured in place; they could be tied to the logs with ligatures (leather, root) through the chinks, but I can't see that in the photo.  Perhaps some reader can finish solving the puzzle.

Interesting.  You learn something every day.