"It is a shame that so much of what remains of ancient Gaulish is the linguistic equivalent of a spoil heap.  Even the dozen words that entered English by various routes seem to confirm the Roman view of a downwardly mobile race of simpletons and trouble-makers: bucket, car, crock, crockery, dad, flannel, gaol, gob, noggin, peat, slogan and truant." 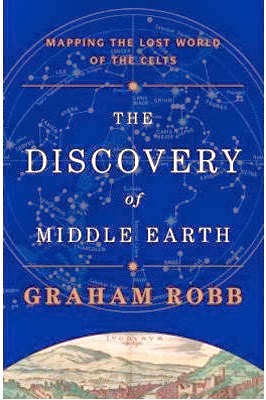 That observation comes from a book I just finished reading - The Discovery of Middle Earth: Mapping the Lost World of the Celts.  It's a scholarly work that gave me a better insight into the world of pre-Roman Europe.  Since the Celts left almost no written records, the author uses the geography of their road systems as a marker of their scientific expertise.  Some clippings:


"Fifty generations ago the cultural empire of the Celts stretched from the Black Sea to Ireland and the Highlands of Scotland.  In six hundred years, the Celts had produed some of the finest artistic and scientific masterpieces of the ancient world.  In 58 BC, Julius Caesar marched over the Alps, bringing slavery and genocide to western Europe.  Within eight years the Celts of what is now France were utterly annihilated, and in another hundred years the Romans had overrun Britain.  It is astonishing how little remains of this great civilization." (from the cover blurb)

"The cultures known as Celtic belong to the forbiddingly named Iron Age, which was also the age of precision insruments, high-speed transport, crop rotation and land management, intellectual education of the young and the first European towns." (xv)

"Tribes who used perishable materials where the Romans used stone, and who recorded their histories in nothing more durable than brain tissue, are unlikely to be seen as sophisticated precursors of the modern world." (xvii)

I've not added it to my recommended books category because it's a bit "TMI" on the solstice lines and road networks, but it will be of interest to those who want to learn more about the Druids and this period of European history.