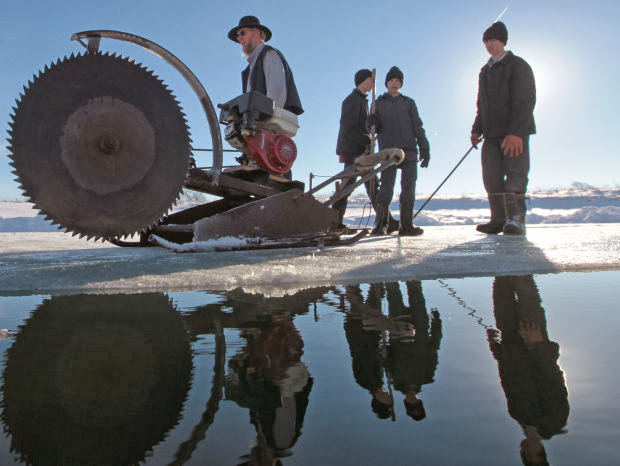 It's still done in Wisconsin, primarily by the Amish, as reported in the Wisconsin State Journal:


The 1,500 blocks cut Saturday will be used to keep food cold year-round and helps make ice cream in the summer. A few blocks in a deep freeze box, which sometimes are old, non-working chest freezers, can last four to five days. There is no central ice warehouse. Instead, each Amish family has its own icehouse that can hold 200 to 250 blocks of ice. Built with well-insulated walls more than a foot thick, ice has been known to keep for two or even three years in an icehouse...

The ice harvest is efficient and free but requires those that receive ice to help with the work.

A 90-foot-by-50-foot section of the pond was shoveled off on Christmas Eve. On Saturday, Miller ran the main 3-foot-in-diameter power saw for making long cuts into the ice while another power saw, similar to a chain saw, was used to cross-cut the section into blocks. A worker then used a 4-foot-long, 5-inch-wide chisel to break the ice from the main ice section because Miller’s saw didn’t cut all the way through the ice.

The blocks were then pushed with 10-foot poles into a main channel and guided with pitchforks toward a wooden ramp positioned under a raised barbwire fence and onto a flatbed trailer. Six to eight blocks at a time were then slid up the 36-foot-long ramp. This was done with the help of Diamond, a cross between a draft and drive horse, who was attached to a rope and a bracket that was stabilized at the end of the row of ice blocks.

A single layer of 100 to 200 blocks of ice can cover the floor of a flatbed, depending on its size. Blocks are off-loaded by hand at the icehouse.

“Your arms get long after you pick these buggers up for a while,” Martin said.

I'm old enough to remember iceboxes.  Not at home, but when our family used to go "up north" to go fishing, some of the resort cabins in the 1950s still provided iceboxes for food storage.