Say goodbye to the axolotl 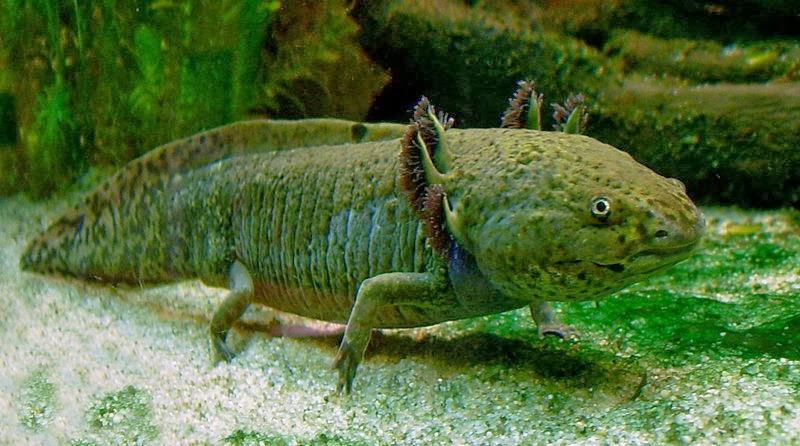 The axolotl... also known as a Mexican salamander (Ambystoma mexicanum) or a Mexican walking fish, is a neotenic salamander, closely related to the tiger salamander. Although the axolotl is colloquially known as a "walking fish", it is not a fish, but an amphibian. The species originates from numerous lakes, such as Lake Xochimilco underlying Mexico City. Axolotls are unusual among amphibians in that they reach adulthood without undergoing metamorphosis. Instead of developing lungs and taking to land, the adults remain aquatic and gilled.

Sad news today, as reported by The Guardian:


Mexico's salamander-like axolotl may have disappeared from its only known natural habitat in Mexico City's few remaining lakes....

The axolotl is known as the "water monster" and the "Mexican walking fish." Its only natural habitat is the Xochimilco network of lakes and canals, which are suffering from pollution and urban sprawl. Biologist Armando Tovar Garza, of Mexico's National Autonomous University, described an attempt last year by researchers to try to net axolotls in the shallow, muddy waters of Xochimilco as "four months of sampling zero axolotls"...

Our children's children will grow up in a vastly depleted and markedly less interesting world.  (Unless they are interested in cockroaches and jellyfish).

Update (March 2014): I should have used "au revoir" rather than "goodbye" in the title, because some survivors in the wild have been located -


"...biologist Armando Tovar Garza of Mexico's National Autonomous University said Friday that members of the team carrying out the search had seen two axolotls during the first three weeks of a second survey expected to conclude in April."