"On the cover of Rolling Stone..." 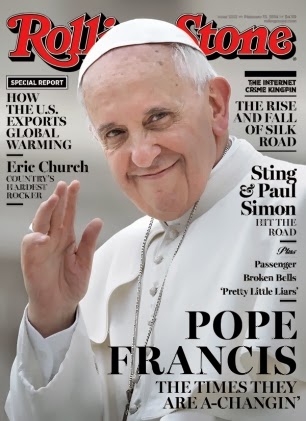 This week's cover of Rolling Stone features someone who would never have been imagined there by Dr. Hook and the Medicine Show in 1972.*

Excerpts from the long (and interesting) lead story about him:


By all accounts, the papal conclave that elevated Bergoglio assumed it was electing a fairly anodyne compromise candidate. Cardinals liked the idea of a pope from Latin America, one of the Church's leading growth markets. They also responded well to a stirring three-minute speech Bergoglio gave during the conclave, in which he said the Church, in order to survive, must stop "living within herself, of herself, for herself."

But he gave no other indication that he'd be any kind of change agent. In the days after his election, most newspapers described him as a safe, conservative choice...

The pope's tonal changes don't necessarily signal a wild swing from tradition. Francis has ruled out the ordination of women, for example, and he still considers abortion an evil. But those obsessed with contextualizing Francis would do well to take a look at the impromptu press conference he granted last summer to gathered Vaticanisti (members of the Vatican press corps) during the flight back from a trip to Rio. Father Federico Lombardi, director of the Vatican press office, told me he'd expected the press conference would go about 20 minutes. It lasted for nearly 90, and ended up including the pope's famous "Who am I to judge?" response, which is normally the only part of the exchange that's quoted. But reading the full transcript or, better yet, watching longer excerpts on YouTube helps to convey the true context.

A reporter asks Francis, who is standing at the head of the aisle, about the existence of a "gay lobby" within the Vatican. Francis begins by making a joke, saying he hasn't yet run into anyone with a special gay identification card. But then his face becomes serious and, gesturing for emphasis, he says it's important to distinguish between lobbies, which are bad – "A lobby of the greedy, a lobby of politicians, a lobby of Masons, so many lobbies!" he says later in the press conference – and individual gay people who are well-intentioned and seeking God. It's while speaking to the latter point that he makes the "Who am I to judge?" remark, and this part of the video is really worth watching, because, aside from the entirely mind-blowing fact of a supposedly infallible pope asking this question at all, his answer is never really translated properly. What he actually says is, "Mah, who am I to judge?" In Italian, mah is an interjection with no exact English parallel, sort of the verbal equivalent of an emphatic shrug. My dad's use of mah most often precedes his resignedly pouring another splash of grappa into his coffee. The closest translation I can come up with is "Look, who the hell knows?" If you watch the video, Francis even pinches his fingers together for extra Italian emphasis. Then he flashes a knowing smirk...

Even simple gestures, like Francis' rejection of the papal palace, went beyond mere symbolism. "The main reason he didn't want to live there mostly had to do with autonomy," says a Vatican clergyman who has worked closely with multiple popes. "In the palace, they can control what gets to you."..

Much more at the link, which discusses not just this Pope but the status of modern Catholicism.  If you're going to waste time at work today on the internet, try this article rather than TYWKIWDBI entries on the movement of flies on windowpanes.

*There have been many other people featured on the cover who have not been rock musicians or entertainers (in the conventional sense): Jar-Jar Binks, George W. Bush, Princess Caroline of Monaco, E.T., Hubert Humphrey...