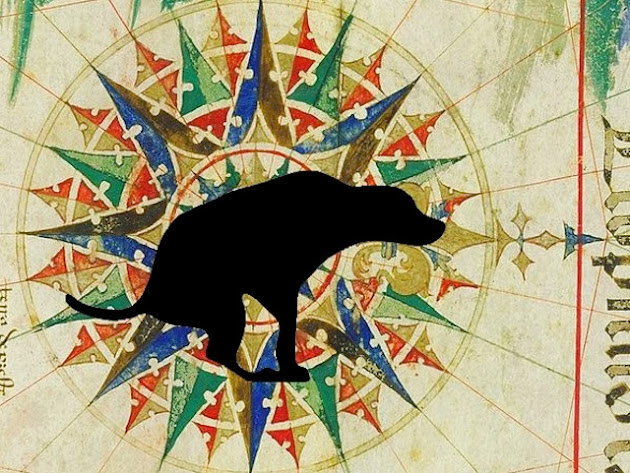 Let's start the new year with something in the TYWKIWDBI category.  Here's the introduction and results from an abstract published in Frontiers in Zoology:


Several mammalian species spontaneously align their body axis with respect to the Earth's magnetic field (MF) lines in diverse behavioral contexts. Magnetic alignment is a suitable paradigm to scan for the occurrence of magnetosensitivity across animal taxa with the heuristic potential to contribute to the understanding of the mechanism of magnetoreception and identify further functions of magnetosensation apart from navigation. With this in mind we searched for signs of magnetic alignment in dogs. We measured the direction of the body axis in 70 dogs of 37 breeds during defecation (1,893 observations) and urination (5,582 observations) over a two-year period. After complete sampling, we sorted the data according to the geomagnetic conditions prevailing during the respective sampling periods. Relative declination and intensity changes of the MF during the respective dog walks were calculated from daily magnetograms. Directional preferences of dogs under different MF conditions were analyzed and tested by means of circular statistics.

Dogs preferred to excrete with the body being aligned along the North-south axis under calm MF conditions. This directional behavior was abolished under Unstable MF. The best predictor of the behavioral switch was the rate of change in declination, i.e., polar orientation of the MF.

Conclusions at the link.  Via the Motherboard blog at Vice (whence the image), where there is further commentary.

Addendum:   Snow-diving foxes also orient themselves according to geomagnetic fields:


They found that foxes strongly prefer to jump in a north-easterly direction, around 20 degrees off from magnetic north. This fixed heading was important for their success as hunters. They were more likely to make a kill if they jumped along their preferred axis, particularly if their prey was hidden by high cover or snow. If they pounced to the north-east, they killed on 73% of their attacks; if they jumped in the opposite direction, they success rate stayed at 60%. In all other directions, only 18% of their pounces were successful...

Video and a diagram at my 2011 post: A fox dives into deep snow.