14 Quite Interesting facts about language

The word “infant” is from the Latin for “unable to speak” 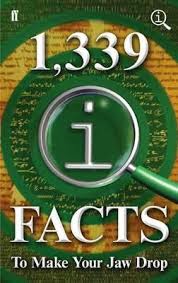 A baby pterosaur is called a flapling.

Nudiustertian means “relating to the day before yesterday.”

The word “journey” is from the French journee and once meant the distance one could walk in a day.

Lalochezia is using swearing to relieve stress or pain.

The faint trace of perfume left in the wake of a passing person is known as sillage.

Plutomania is the delusion that one is immensely rich.

Kayak is an Inuit word meaning “man’s boat”; strictly speaking, the Olympic women’s version should be called the umiak competition.

Ebriety is the opposite of sobriety.

Grenade is French for pomegranate.

Latin and Gaelic have no words for ‘yes’ and ‘no'.

An old name for the kestrel is windfucker.

A spermologer is a collector of trivia.

Selections from 1,339 QI Facts To Make Your Jaw Drop, which I received as a Christmas present.

One from the book that I did not include was "The metal clip for a light bulb inside a lamp shade is called a harp," because the harp is relevant to the lamp shade; it has nothing to do with the light bulb.