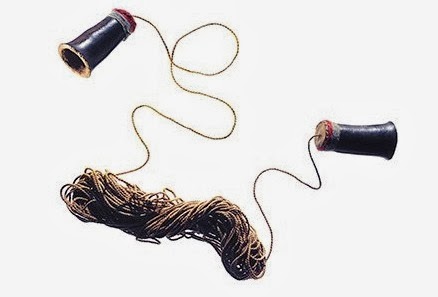 Not an electric telephone obviously, but a true "phone" designed to transmit sounds over distances, created in South America before the era of European contact.  Smithsonian has the story:


The marvel of acoustic engineering—cunningly constructed of two resin-coated gourd receivers, each three-and-one-half inches long; stretched-hide membranes stitched around the bases of the receivers; and cotton-twine cord extending 75 feet when pulled taut—arose out of the Chimu empire at its height. The dazzlingly innovative culture was centered in the Río Moche Valley in northern Peru, wedged between the Pacific Ocean and the western Andes. “The Chimu were a skillful, inventive people,” Matos tells me as we don sterile gloves and peer into the hollowed interiors of the gourds. The Chimu, Matos explains, were the first true engineering society in the New World, known as much for their artisanry and metalwork as for the hydraulic canal-irrigation system they introduced, transforming desert into agricultural lands...

More at the link.  I've been unable to locate a better photograph than the embed, but it's clear that this was the equivalent of a modern tin-can telephone.