"The writing on the wall" 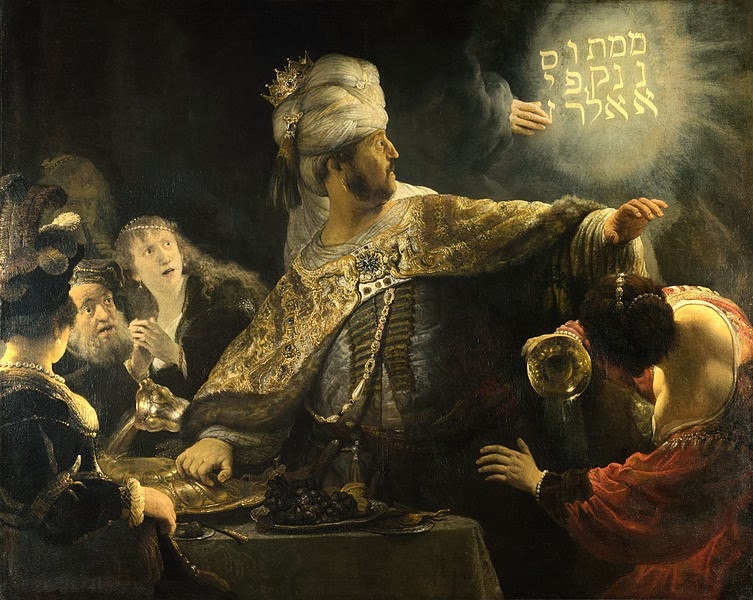 This is the memorable 51st quatrain in the Rubaiyat of Omar Khayyam:


The Moving Finger writes; and, having writ,
Moves on: nor all thy Piety nor Wit
Shall lure it back to cancel half a Line,
Nor all thy Tears wash out a Word of it.

The event refers to an apparition of writing on the wall, witnessed during the Feast of Belshazzar.


During the drunken feast, Belshazzar uses the holy golden and silver vessels, from Solomon's Temple, to praise "the gods of gold and silver, brass, iron, wood, and stone". Soon afterwards, disembodied fingers appear and write on the wall of the royal palace the words:

The advisers attempt to interpret the meaning. However, their natural denotations of weights and measures were superficially meaningless: "two minas, a shekel and two parts".

Therefore, the King sends for Daniel, an exiled Israelite taken from Jerusalem, who had served in high office under Nebuchadnezzar. Rejecting offers of reward, Daniel warns the king of the folly of his arrogant blasphemy before reading the text. The meaning that Daniel decrypts from these words is based on passive verbs corresponding to the measure names, "numbered, weighed, divided."


And this is the writing that was inscribed: mina, mina, shekel, half-mina. This is the interpretation of the matter: mina, God has numbered the days of your kingdom and brought it to an end; shekel, you have been weighed on the scales and found wanting; half-mina, your kingdom is divided and given to the Medes and Persians. —Daniel 5:25–28

His free choice of interpretation and decoding revealed the menacing subtext: "Thou art weighed in the balance and art found wanting." The divine menace against the dissolute Belshazzar, whose kingdom was to be divided between the Medes and Persians, was swiftly realized. That very night King Belshazzar is slain, and Darius the Mede becomes King.

p.s. - a note to the Grammar Nazis and copyeditors reading the blog:  the first "nor" in the quotation has always bothered me.  It seems it should be "NOT all thy Piety and wit... NOR all thy Tears..."  Was "nor... nor..." a coventional pairing in previous centuries?