As reported by the BBC:


During World War Two, conscientious objectors in the US and the UK were asked to volunteer for medical research. In one project in the US, young men were starved for six months to help experts decide how to treat victims of mass starvation in Europe... 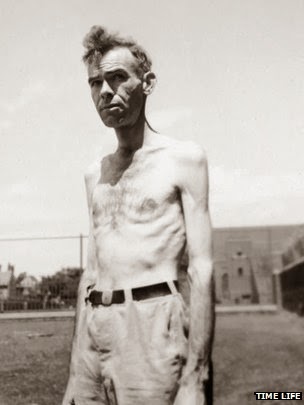 The experiment started in November 1944 and for the first three months they
were fed to their optimum weight and monitored. Then their rations were cut dramatically. Food quickly became an obsession... The men ate meals twice a day. One might be cabbage, turnips and half a glass of milk. On another day, it might be rye bread and some beans... Like many hungry people in Europe, the men never had meat, and calories were set at 1,800 or less

The regime was tough - during the six months they were being starved, the men were expected to walk or run 22 miles (36 kilometres) every week, expending over 1,000 calories more than they consumed each day...

There's quite a bit more at the link, and at the Wikipedia page, which includes this observation:


One of the crucial observations of the Minnesota Starvation Experiment discussed by a number of researchers in the nutritional sciences—including Ancel Keys—is that the physical effects of the induced semi-starvation during the study well approximates the conditions experienced by patients afflicted with a range of eating disorders, such as anorexia nervosa and bulimia nervosa. As a result of the study it has been postulated that many of the profound social and psychological effects of these disorders may result from undernutrition, and recovery depends on physical re-nourishment as well as psychological treatment.