The hand span of professional quarterbacks 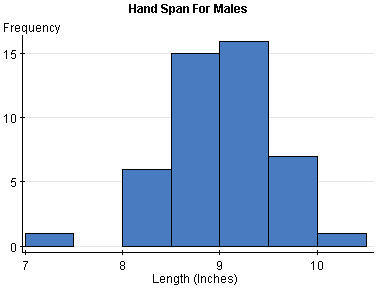 As reported in the Wall Street Journal:


Inside the game, it is understood that both starting quarterbacks [for the Superbowl] possess a trait that renders them all but weatherproof. The Seattle Seahawks' Russell Wilson and the Denver Broncos' Peyton Manning have huge hands...

But today's executives understand that height isn't the only or even the most important measure of a quarterback's size. Wilson stands only 5 feet 11. But from pinkie to thumb, his hands measure 10¼ inches...

In an informal poll of league executives this week, nearly all said the league was moving away from small-handed quarterbacks, in part because of the cold-weather advantage of large hands. Former NFL executive Gil Brandt said that throughout history, the list of small-handed NFL quarterback stars is short—and may consist only of Hall of Famer Norm Van Brocklin. "He had short little stubbs [sic] for fingers," said Brandt.

In a shocker, star Arkansas quarterback Tyler Wilson, once considered a top draft prospect, fell to the fourth round of last year's draft. The team that drafted him, the Oakland Raiders, released him before he ever played in a game — which seldom happens for a pick that high. Scouts have confirmed that his incredibly small hands, 8¾ inches, were a huge factor...

My hand span is about 9 inches, which is one reason why, when I retired from academia, I decided to become a blogger rather than a professional quarterback.

Histogram from StatCrunch (data source not given and validity not assured).