Pentagon to give away 13,000 armored vehicles

The Pentagon wants to give away 13,000 mine-resistant, ambush-protected trucks because they have outlived their original purpose. 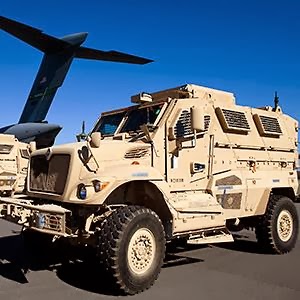 Although the trucks' armored bodies are credited with protecting U.S. troops from roadside bombs in Iraq and Afghanistan, military planners want more-versatile vehicles that can be deployed quickly as troop levels decrease. A full-size MRAP (pronounced EM-rap, of course) weighs about 40,000 pounds, stands 10 feet tall and costs the Pentagon about $500,000 new...

Interest from foreign militaries has been tepid. But they are a hit with stateside police agencies. Almost 200 trucks have been distributed to police departments since August and requests are pending for an additional 750 trucks. The vehicles, many of which feature machine-gun turrets, are off-limits to private citizens and businesses.

Lucky recipients run from the Ohio State University campus police force to Florence County, S.C., which replaced an armored vehicle from the 1970s that the sheriff department's SWAT team had used for about 15 years. A new armored truck would have cost at least $188,000...

"Nobody will want them," says Dean Lockwood, an analyst with Forecast International Inc. "The Afghan terrain is hell on vehicles. It's eating them alive."

For police, though, the bulky trucks project a show of force at hostage incidents, civil disturbances and other situations where SWAT officers with military-grade weapons, uniforms and helmets are deployed.

Thirteen thousand surplus vehicles that cost a half-million dollars each.
Going to American urban and campus police forces.
To be replaced by even more vehicles.