Gold - in one gram portions 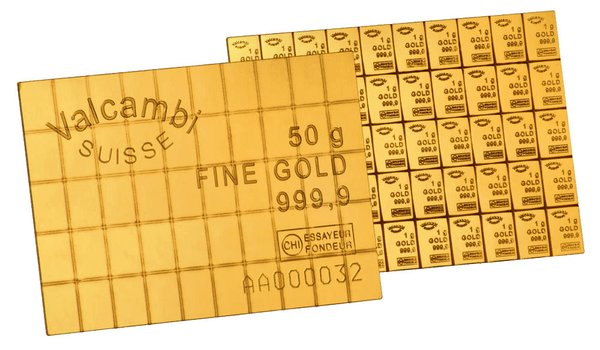 For the dedicated survivalist ("prepper"), there are now forms of gold available that are designed for "retail" use.  If you need to leave your shelter to buy ammunition, you probably don't want to be carrying with you bars of bullion (or even one-ounce coins at - currently - $1,600 each).

The Combibars shown above are precisely scored (in the fashion of Kit-Kat bars) to allow one-gram wafers to be snapped off.  At current prices a gram would be about $50 (but there's no telling what they might be worth in a dystopian world).  They are also available in silver.

Their current popularity is fueled not so much by fears of an apocalypse as by fears of economic instability and currency collapse, as described by Reuters:

Elsewhere, demand is particularly strong among Germans, still scarred by post-World War One hyperinflation, when money became all but worthless and it took a wheelbarrow full of notes to buy a loaf of bread.

"Above all, it's people aged between 40 and 70 that are investing in gold bars and coins," said Mesaric. "They've heard tales from their parents about wars and crises devaluing money."

Nonetheless, as developments in the euro zone lurch from one crisis to another, demand for gold that can be sold in vending machines is also growing. Since the launch of the machines, which operate under the name "GOLD to go", 50,000 customers have withdrawn more than 21 million euros in gold. The average buyer is male, over 50 years old and well off.