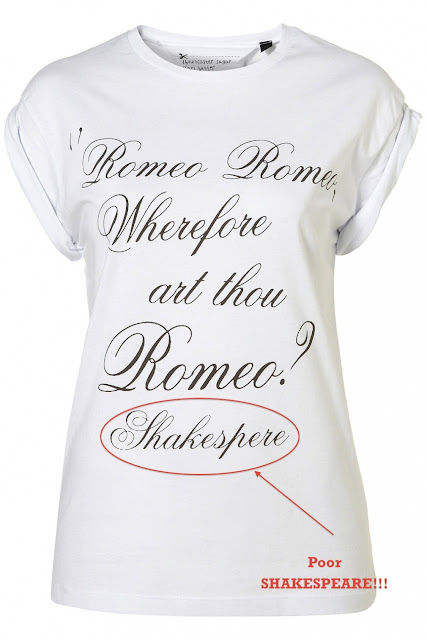 Retailers in the U.K. are being criticized for placing on sale the t-shirt above.


Anybody who buys it will not only look really, really silly, but will be trying to make people think they know about Shakespeare. Because it’s cool. Shakespeare is cool without having to put it on a tshirt. And if you didn’t see the error, you don’t deserve to use his words to make a fashion statement.

The man from Avon actually spelled his name in a variety of ways on legal documents through this life.  There are six surviving signatures by him, as follows:

As noted at Wikipedia this is not as ominous as it appears:


Most of these are abbreviated versions of the name, using breviographic conventions of the time. This was common practice. For example Edmund Spenser sometimes wrote his name out in full (spelling his first name Edmund or Edmond), but often used the abbreviated forms "Ed: speser" or "Edm: speser".

We'll come back to the Stratford man's name some other time.  To finish with the t-shirt, we note that it is now sold in a "cropped" version: 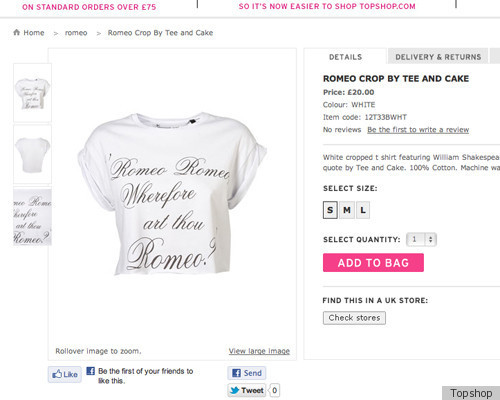 The pricing has not been reduced by a third, however.

The reason I posted the shirt was because it gives me an excuse for a rant that is familiar to many (?most) English majors.  Students and amateur theatrical groups almost invariably butcher the line by declaiming "Romeo, Romeo, wherefore ART thou, Romeo?"  They interpret "wherefore" as an archaic version of "where," and confusedly assume that Juliet is unable to locate Romeo standing below her balcony.

For the Elizabethans, "wherefore" meant "why," as in this Biblical verse: "Even all nations shall say Wherefore hath the LORD done thus?"  The proper emphasis on the Shakespearean verse is therefore "Romeo, Romeo, wherefore art thou ROMEO?" as she wonders why he had to be a Montague.


Enough.  Most of you know this already.  But it bugs me when I hear it done incorrectly.