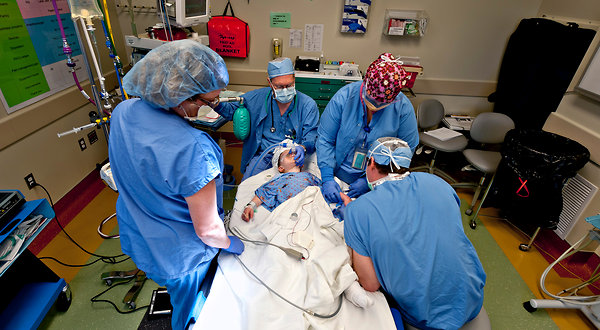 Devon Koester, age 2 ½, getting anesthesia at the Center for Pediatric Dentistry in Seattle
for an operation that included a root canal.  Photo: Stuart Isett.

In the surgical wing of the Center for Pediatric Dentistry at Seattle Children’s Hospital, Devon Koester, 2 ½ years old, was resting last month in his mother’s arms as an anesthesiologist held a bubble-gum-scented mask over his face to put him under. The doctors then took X-rays, which showed that 11 of his 20 baby teeth had cavities. Then his pediatric dentist extracted two incisors, performed a root canal on a molar, and gave the rest fillings and crowns...

Dentists offer a number of reasons so many preschoolers suffer from such extensive dental decay. Though they are not necessarily new, they have combined to create a growing problem: endless snacking and juice or other sweet drinks at bedtime, parents who choose bottled water rather than fluoridated tap water for their children, and a lack of awareness that infants should, according to pediatric experts, visit a dentist by age 1... And because some toddlers dislike tooth-brushing, some parents do not enforce it...

“It’s not just about kids in poverty... Affluent families may have nannies who “pacify kids by giving them a sippy cup all day,” Dr. Lindemeyer said.

There are more details at the New York Times, including recommendations for good dental health in preschoolers (all of it basic common sense).