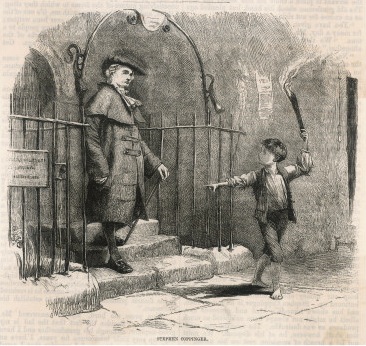 "Among propertied families, it was common on black nights for a single servant to light the way.  Gracious hosts instructed footmen to escort departing guests safely home... Footmen accompanied coaches through city streets, carrying flambeaux aloft as they trotted alongside.  Ahead of the coach, a "moon-man" sometimes served as a guide, holding a globular lantern - the "moon" - atop a long pole.

In most towns and cities, one could hire a linkboy for a small sum.  These, for the most part, were orphans or other impoverished adolescents who, for a pedestrian's benefit, carried links (torches) or, less often, lanterns.  In some English communities, they were nicknamed mooncursers, for the harm done their trade by moonlight... In Venice, they were termed codeghe, and in France porte-flambeaux or, for lantern-carriers, falots... At least in London, however, linkboys bore a checkered reputation for consorting with street ruffians.  "Thieves with lights," Daniel Defoe charged.

The above from "At Day's Close: Night in Times Past." And this from Wikipedia:


The term derives from "link", a term for the cotton tow that formed the wick of the torch. Links are mentioned in William Shakespeare's Henry IV, part 1, as Falstaff teases Bardolph about the shining redness of his face: "Thou hast saved me a thousand marks in links and torches, walking with thee in the night betwixt tavern and tavern." (Act III, scene 3).