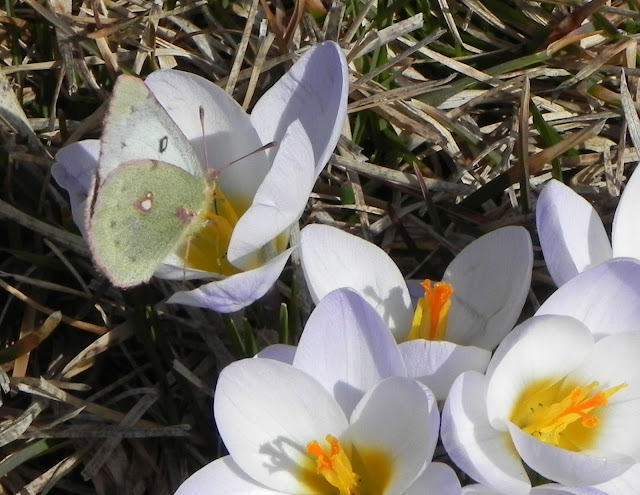 In which I am reminded that "looks can be deceiving."

Butterfly season has started in Wisconsin, about a full week earlier than usual.  Unusually warm weather caused the crocuses in our front yard to emerge two weeks early, and as I was looking out the front door at them on March 11, I was gobsmacked to see a white butterfly fluttering from one patch to another, obviously nectaring.  For a butterfly enthusiast in the northern latitudes, the first appearance of the creatures in the spring signals the start of a new year of adventure.  I grabbed my camera and rushed out the door.

This little fellow was in a hurry, not lingering long on any one blossom, so I had difficulty getting good images.  He/she looked a bit unusual, but I had difficulty putting my finger on it, and it wasn't until I got the images transferred to my computer that I had any time to ponder the matter. 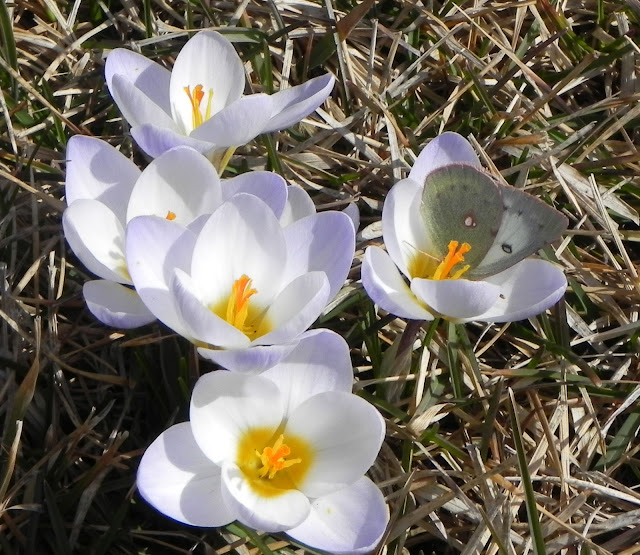 The butterfly wasn't pure white.  The underside of the hindwing had an obvious greenish tinge.  The top, however, was quite obviously white, with a black margin on the forewing, evident in this slightly blurry image captured while she was in flight between crocus clusters (flying to the right, wings at the low point of the downbeat): 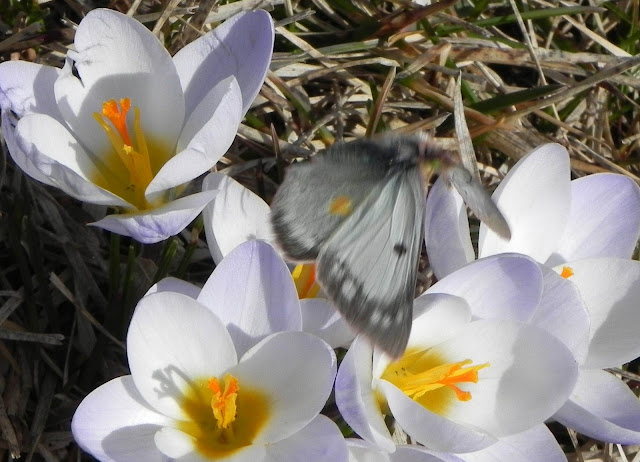 And on this third image there is a curious yellow spot overlying the dorsum of the hindwing.  That made no sense to me, and I assumed it was some bit of pollen that come off a crocus stamen and had stuck to the wing.

There are seven species of the subfamily of "Whites" that have been seen in Wisconsin.  I checked them all, and the only one this could possibly be was the Cabbage White (Pieris rapae) - a common butterfly whose caterpillars can be pests for North American farmers.

I submitted my sighting to the database of the Southern Wisconsin Butterfly Association.  The following day I received a surprising email reply from the webmaster/dataminder, who is an expert on butterflies:


Fantastic sighting! It was a female, white form Clouded Sulphur. The earliest record by over a month! Can I submit this to the NABA sightings page?

That explained everything.  Colias Philodice is not a member of the butterflies known as the Whites - it's a "Sulphur," normally brilliantly yellow, and similar in size, behavior, and distribution to the Cabbage White.  They typically have a yellow spot on the dorsum of the hindwing, and occasionally a female can appear as an "alba" (white) variant.

Finally, as I was writing this up, I checked my own photos and found that not only had I previously photographed an alba variant of a sulphur, but I had posted in this blog an image of an alba female in copulo with a normal yellow male!

So, not only do you "learn something every day" - sometimes you have to relearn things over and over again.