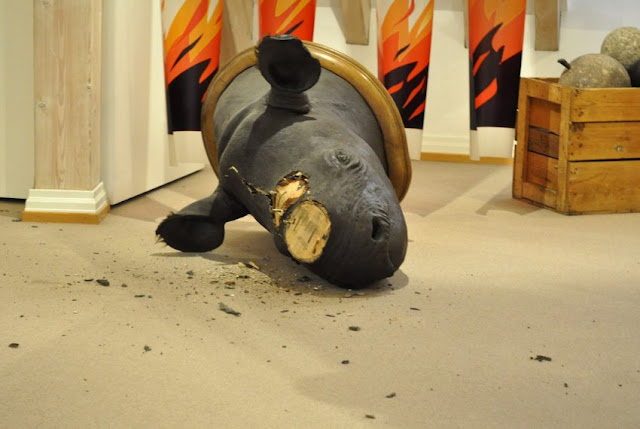 The story of this ongoing stupidity/cupidity is in Der Spiegel:


The large collection of African hunting trophies at the Offenburg Museum in the southwestern German city of the same name has long been a source of great pride at the cultural institution. It is based on around 80 stuffed animals donated to the museum in 1950 by Gretchen Cron, a wealthy woman who, together with her husband, spent much of her life hunting in exotic places until the outbreak of World War II. Cron felt so guilty about killing so many animals in danger of extinction that she donated her collection to the museum.
Among the trophies displayed was the head of a black rhinoceros, a species native to South Africa.

On Saturday, Feb. 18, four thieves entered the museum during broad daylight. Two of them distracted the museum staff and the two others rushed over to the rhino head. They removed the trophy from its display, mounted at a lofty 4 meters (13 feet), and broke off its horn with a sledgehammer. Museum officials described the act as "brazen and brutal."...

Health properties or not, the horns are extremely valuable, with a black market value as high as €50,000 ($65,500) per kilogram: more than its weight in gold. Depending on the size and quality, Europol estimates that a single rhino horn can be worth between €25,000 and €200,000.

Details at the link.