How African countries got their borders 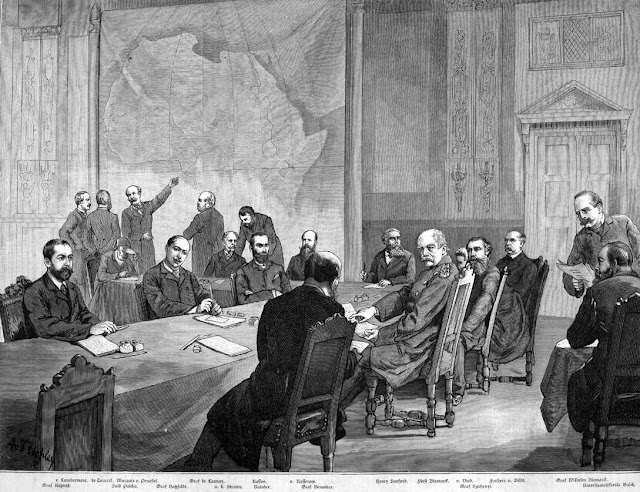 In 1884 at the request of Portugal, German Chancellor Otto von Bismark called together the major western powers of the world to negotiate questions and end confusion over the control of Africa. Bismark appreciated the opportunity to expand Germany's sphere of influence over Africa and desired to force Germany's rivals to struggle with one another for territory.

The Berlin Conference was Africa's undoing in more ways than one. The colonial powers superimposed their domains on the African Continent. By the time Africa regained its independence after the late 1950s, the realm had acquired a legacy of political fragmentation that could neither be eliminated nor made to operate satisfactorily. The African politico-geographical map is thus a permanent liability that resulted from the three months of ignorant, greedy acquisitiveness during a period when Europe's search for minerals and markets had become insatiable.

At the time of the conference, 80% of Africa remained under Native Traditional and local control.

Fourteen countries were represented by a plethora of ambassadors when the conference opened in Berlin on November 15, 1884 by the imperial chancellor and architect of the German Empire, Otto von Bismarck to settle the political partitioning of Africa. Bismarck wanted not only to expand German spheres of influence in Africa but also to play off Germany's colonial rivals against one another to the Germans' advantage. The countries represented at the time included Austria-Hungary, Belgium, Denmark, France, Germany, Great Britain, Italy, the Netherlands, Portugal, Russia, Spain, Sweden-Norway (unified from 1814-1905), Turkey, and the United States of America. Of these fourteen nations, France, Germany, Great Britain, and Portugal were the major players in the conference, controlling most of colonial Africa at the time...

Following the conference, the give and take continued. By 1914, the conference participants had fully divided Africa among themselves into fifty unnatural and artificial States.

Here is a precolonial map:

Excerpted from an extensive discussion at Africa Federation, via fyeahblackhistory.