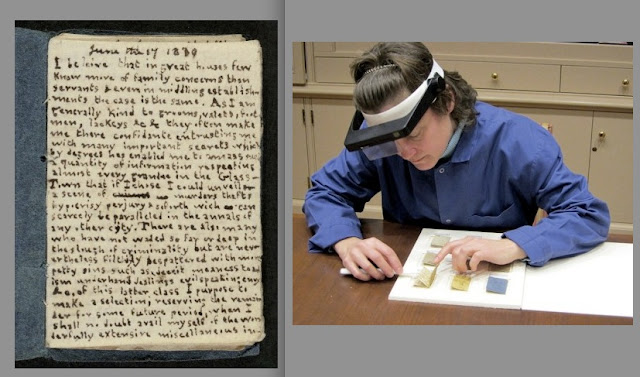 From an article in a recent issue of Harvard Magazine:


In 1821, Charlotte’s mother died, leaving widower Patrick, a curate in rural West Yorkshire, to care for their six children. The two oldest died four years later of tuberculosis (which would eventually take them all before Patrick himself died). The four surviving children created what their father called “a little society among themselves.” Charlotte, age 10, and Branwell, 9, began a series of plays based on the adventures of their toy soldiers, set in their make-believe world of Glass Town and Angria in Africa. The youngest sisters, Emily and Anne, would follow along with stories, and the self-described “scribblemaniacs” kept at it into early adulthood.

About 20 of these texts took the form of handsewn miniature books two inches tall. Harvard’s Houghton Library has nine of them, given by the poet Amy Lowell... Sotheby’s was set to auction a Charlotte Brontë mini still in private hands just as this issue went to press, at an estimated price of as much as half a million dollars.*