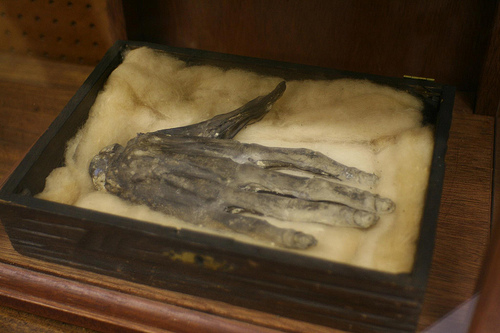 Excerpts from a paragraph in "At Day's Close: Night in Times Past" -


"The most notorious charm, the "thief's candle," found ready acceptance in most parts of Europe.  The candle was fashioned from either an amputated finger or the fat of a human corpse, leading to the frequent mutilation of executed criinals.  Favored, too, were fingers severed from the remains of stillborn infants.  Because they had not been baptized, their magical properties were considered more powerful.  To enhance the candle's potency, the hands of dead criminals, known as Hands of Glory, were sometimes employed as candlesticks.
Not unknown were savage attacks on pregnant women whose wombs were cut open to extract their young.  In 1574, Nicklauss Stuller of Aydtsfeld was convicted of this on three occasioins, for which he was "torn thrice with red-hot tongs" and executed upon the wheel... Burglars used these gruesome amulets to make certain that families remained asleep while homes were plundered... Before entering a home in 1586, a German vagabond ignited the entire hand of a dead infant, believing that the unburned fingers signified the number of persons still awake.  Even in the late eighteenth century, four men were charged with unearthing the recently interred corpse of a woman and removing her fat for a thief's candle.  Her husband had grown suspicious after fishermen, looking for bait, found an amputated hand along the seashore."

And this interesting bit of postulated etymology, from Wikipedia:


Etymologist W.W. Skeat reports that, while folklore has long attributed mystical powers to a dead man's hand, the specific phrase "hand of glory" is in fact a folk etymology: it derives from the French "main de gloire", a corruption of mandragore, which is to say mandrake. Skeat writes: "The identification of the hand of glory with the mandrake is clinched by the statement in Cockayne's Leechdoms, i. 245, that the mandrake 'shineth by night altogether like a lamp.'" (Cockayne in turn is quoting Pseudo-Apuleius, in a translation of a Saxon manuscript of his Herbarium.)

The photo shows a specimen in the Whitby Museum.