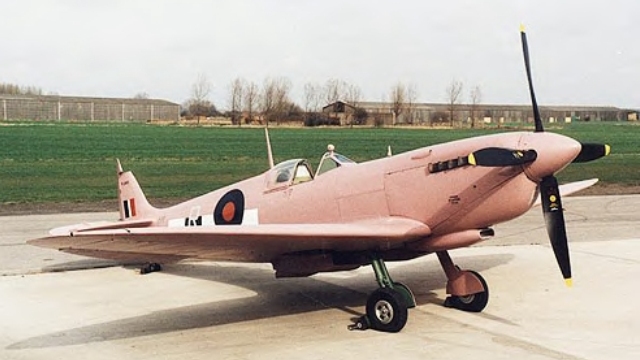 Seriously.  From an article at io9:


Spitfires went through extensive rounds of camouflage paint, from dark and light brown, to a pale gray, to a baby blue. Perhaps their most unusual color, though, was a light pink. The pink, slightly too washed-out to be an actual baby pink, still seems bright enough to signal every enemy within five miles. This is certainly true when the Spitfires were seen from above. They stand out brightly against the ground. To make sure they were rarely seen from above, these planes were painted to fly just under cloud cover. Although the planes were ideally meant to fly at sunset and sunrise, when the clouds took on a pinkish hue and made the plane completely invisible against them, they were also useful during the day. Clouds are pinker than we give them credit for.

Further details and explanation at the link.   I sent the link to my brother-in-law, who is an air traffic controller and military history enthusiast.  He replied that not only were planes painted pink, but also some submarine periscopes and snorkels.