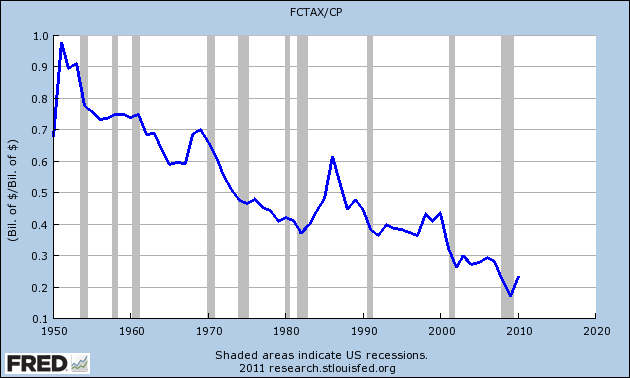 Data from the Federal Reserve Bank of St. Louis, via Slate.


The percentage of corporate profit (after taxes) paid as income tax has been on a steady downward trend since the 1950s. In the last year or so, it has rebounded a trifle since hitting its all-time low during the Great Recession, but still sits comfortably below any other point in the last six decades. It might be worth remembering that the 1950s were a decade in which “more people joined the middle class than at any time in history.” And yet, one of the great stumbling blocks preventing the “supercommittee” from hammering a long-term deficit reduction deal is the GOP fixation on the premise that taxes on American corporations are too high.

(It was pointed out to me yesterday on a different post that as low as current tax rates are, they were even lower (absent) in the nineteenth century and before.