A nest of baby dinosaurs 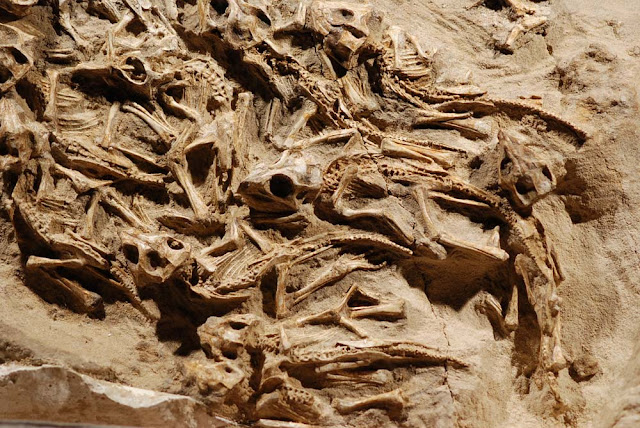 We all (hopefully) know that dinosaur eggs have been found in nests.  Today Live Science had this photo and a story suggesting that they may have lingered in the nests to be cared for by parents.

A nest of 15 young dinosaurs uncovered in Mongolia — cousins of Triceratops — now suggests these plant-eating beasts might have cared for their young, scientists reveal.

The dinosaur is named Protoceratops andrewsi, a sheep-size herbivore that lived about 70 million years ago that's known for the frill at the back of its head. Within the nest were infants about 4 to 6 inches (10 to 15 centimeters) long and probably no more than a year old.

"The evidence suggests they may have been overrun by migrating dunes during a sandstorm," researcher David Fastovsky, a vertebrate paleontologist at the University of Rhode Island, told LiveScience.

I wonder if they were able to delineate any sort of "nest structure" in the matrix to counter the possibility that the carcasses were assembled from a wider area by wind/predators/flash floods etc.  But how fascinating it must have been to find and dissect out this block of specimens.