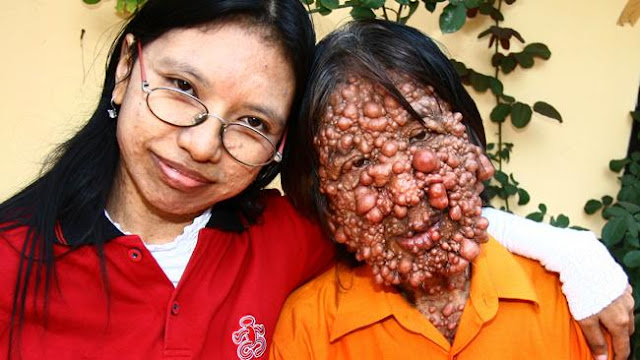 I presume that's what this man has, although the source did not specify.


Chandra Wisnu, 57, suffers from a rare disease that has left him covered in tumours resembling pink bubble wrap.

The father of four - known as "The Bubble Man" in his home village in Indonesia - rarely leaves his house. When he does, he wears three jackets, a balaclava and sunglasses so he doesn't frighten children.

"People are afraid, they are frightened of my horrible face and worried they might catch the disease," he said. "So instead I avoid people, I rarely go out except to pick up my daughter from school. "And when I do I cover my head and my face because I don't want my daughter's friends to bully her for having 'the dad with the horrible face'."

Neurofibromatosis is often described as a "skin disease," but the underlying pathology is systemic, and the health consequences potentially much more devastating that just cosmetic disfigurement.

This man's story is the kind to read on days when you feel your own life is so miserable.